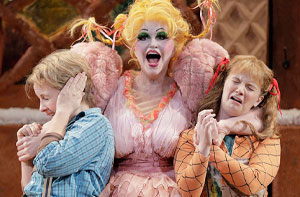 LA Opera’s “Hansel and Gretel” with Sasha Cooke as Hansel, Susan Graham as the Witch and Liv Redpath as Gretel / Photo by Cory Weaver

LA Opera serves up a special treat to start the holiday season with “Hansel and Gretel,” onstage at the Dorothy Chandler Pavilion through Dec. 15. Take your children to see this magical opera. It’s a perfect introduction to the genre, and if you go on Domingo Family Day (Dec. 9), the kids will have even more fun with activities and gingerbread treats straight from the dreamy cookie cottage of the Hansel and Gretel story.

The composer of this 19th-century masterpiece is Engelbert Humperdinck — not the pop singer Arnold George “Gerry” Dorsey who borrowed his name, but the composer who had close ties with Richard Wagner. Humperdinck tutored the great German composer’s son and worked as Wagner’s assistant on “Parsifal.”

Humperdinck’s score for “Hansel and Gretel” uses a Wagnerian-size orchestra, and his music definitely shows Wagner’s influence. It’s an impressive composition that transforms a fairy tale into a work satisfying for adults and kids alike. Music Director James Conlon and the LA Opera Orchestra brought the score and its wonderful melodies to life with their typical verve.

Librettist Adelheid Wette, the composer’s sister, originally wrote a play for her family based on the dark Grimm story and asked her brother to write the music. Their work became an opera quite different from its source, a much more upbeat story with two loving parents and some new characters. We don’t get the trail of breadcrumbs, but we do still get the cannibalistic witch. Incidentally, Wette is a historical figure we should hear more about — she is the only female librettist in the standard operatic repertoire!

For this LA Opera original production, which premiered in 2006, we get an English libretto by Richard Sparks — perfect for the kids. Director and Scenery and Costume Designer Doug Fitch returns to the Dorothy Chandler Pavilion with his merry band of forest creatures, including a 12-foot-tall walking tree and a little purple gnome and his warthog pet, all with big glowing eyes.

When the music begins, we see a giant painting of an idyllic forest that gradually comes to life, first with smoke from the cottage chimney, then with the sky brightening and clouds floating past as a gentle stream flows through the trees. Then the cottage door, several feet off the stage floor, opens, and Hansel and Gretel’s mother does a little sweeping with one of the brooms the family makes for their livelihood. Finally, the scene breaks apart piece by piece like a puzzle, and the family’s cottage appears with the kids who begin singing and playing instead of working because they are so hungry.

Appropriately enough, three of the singers are members of the Domingo-Colburn-Stein Young Artist Program: Liv Redpath who plays Gretel, Taylor Raven who plays the Sandman and Sarah Vautour who plays the Dew Fairy, in quite an impressive costume as tall as a tree and shimmering like a Christmas tree. Craig Colclough, who we saw last here in “Rigoletto,” was hilarious as the father who loves beer. Grammy Award winner Susan Graham took an amusing turn as the Witch, who was not the traditional version with a black hat and green face but a (scary) clown. As we’ve come to expect from LA Opera, the cast delivered a pitch-perfect performance.

Worthy of mention is the Los Angeles Children’s Chorus, members of which had a special part at the end, playing the children that the Witch had turned into gingerbread cookies over the years. Hansel and Gretel break the spell and set them free. To hear the Los Angeles Children’s Chorus sing was the cherry on top of LA Opera’s “Hansel and Gretel” treat.