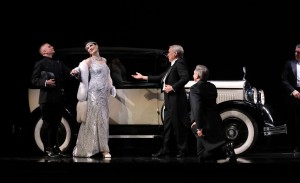 LA Opera’s season-ending party was a blast. Director and Designer Marta Domingo’s production (also seen in 2006 and 2014) of Verdi’s “La Traviata” places the action of the 1853 opera in the roaring 1920s, an era of excess that perfectly fits the story of Violetta, “the woman led astray.”

In the beginning, a gorgeous 1920s Rolls Royce rolls across the stage, dropping off guests at a fabulous, rollicking party complete with glittering silver gowns and glowing green absinthe. The second party scene is also a glitzy and glamorous spectacle — with a band, a disco ball, flashy gold-clad dancers and the muscular Louis A. Williams Jr. (who also danced in the 2014 production).

Domingo’s production design really drives home the themes of love and death, changing as it does with the developing story (and tragedy) of the opera, from Violetta’s heady party days to her sacrifice for Alfredo’s family and then her early death from tuberculosis and heartbreak.

The second act scene in the country house outside Paris is more subtly beautiful, with autumn trees ablaze with rich color and gently falling leaves. And the final act opens with Violetta on her deathbed, silent and still under a starry night sky with gently falling snow behind her.

The design also mirrors the changes in music; Violetta’s singing is full of coloratura in the first act, and softens as the acts play out. Romanian soprano Adela Zaharia’s voice was as sparkling as her beaded silver gown in her company debut. She and tenor Rame Lahaj, both Operalia winners (she in 2017, he in 2016), wowed the audience with their vocal technique. Lahaj has played Alfredo in London, Moscow, Berlin and Paris (with Plácido Domingo).

Conductor and four-time Grammy Award winner James Conlon has conducted nearly 500 Verdi operas to date. He led the orchestra with his typical gusto, which always brings out the best in the musicians.

“La Traviata” is among the most frequently performed operas, but LA Opera’s production is still a must-see.

The party’s not over. There are two more performances of “La Traviata,” Wednesday, June 19, and Saturday, June 22. Consider yourself invited.