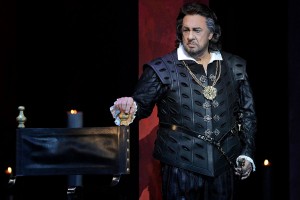 LA Opera opened its 2018-19 season in grand style with Don Carlo, Verdi’s most ambitious opera. A complex drama about conflict among family, nations and religions with forbidden love at its center, Don Carlo, as Music Director James Conlon has said, “claims its place as perhaps the greatest and most enduring grand opéra of them all.”

With Don Carlo, we have it all: a sweeping 19th-century opera in four acts (Verdi originally wrote five acts, and there are various versions of Don Carlo. This one is an Italian translation from the original French libretto.) based on historic figures and events with elaborate set designs and costumes. It’s everything you could want from opera — including the incomparable Plácido Domingo as Rodrigo.

Twenty-eight years ago with LA Opera, Domingo performed the leading tenor role. This season he owned the baritone role of Rodrigo, his sixth Verdi role in LA with James Conlon. With dark hair and beard, he shed decades from his 77 years, giving a powerhouse performance as Rodrigo. Domingo was positively mesmerizing and brought an urgent vitality to the role of the liberal and enlightened friend of Carlo and confidant to the king.

Joining Domingo were some equally impressive talents, and Verdi provides plenty of opportunities for the singers to shine in arias, duets and a quartet. Anna Smirnova blew the audience away with her fine-tuned instrument and her portrayal of Princess Eboli, complete with eye patch and Queen of Hearts hair. Her voice resonated gloriously in the Dorothy Chandler Pavilion. Ana Maria Martinez, who wowed audiences most recently in last season’s Carmen and 2016’s Madama Butterfly, is a Grammy Award winner and a 1995 Operalia winner who brings a celestial quality to all her roles, including here as Elisabeth de Valois, a woman formerly promised to Carlo and then for political reasons married to his father, the king of Spain. Ferruccio Furlanetto (King Philip II) garnered major applause for his monologue, what Conlon calls “arguably the greatest solo in the 19th-century bass repertory.” And it’s always a treat to hear Morris Robinson’s (Grand Inquisitor) resounding bass. Of course, the music is a star all its own, and Conlon and the Orchestra sparkled.

This LA Opera original production features elaborate scenic design by John Gunter and costumes by Tim Goodchild using a palette of black and red. A series of moveable archways in blood red are lit with royal blue creating a De Chirico- and Escher-esque backdrop. Above the arches are dark period paintings depicting death, and perhaps martyrdom, with slashes of red across them. At one point, an immense crucifix hangs precariously over a gathered crowd. The costumes are spectacular, from the ladies’ glittering gowns to the plush red robes of the Grand Inquisitor and the ghostly garb of the grim reaper onstage when the curtain first rises.

LA Opera has indeed given us a magnificent example of grand opéra. Go, and luxuriate in the splendor!