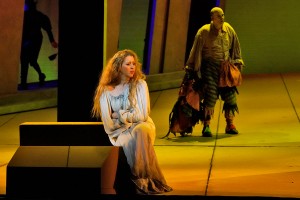 Rigoletto is a study in contrasts — light and dark, tender and brutal, funny and sad. LA Opera’s current production puts Giuseppe Verdi’s groundbreaking musical score front and center as the conceptual and emotional framework from which to explore these dualities. Arresting visuals, sumptuous costumes and talented singers bring the work to a high level of polish in one of this season’s most enjoyable offerings.

That operas were once considered daring and even revolutionary is difficult to imagine from today’s perspective. Yet in earlier eras, they were not infrequently regarded as vehicles for cultural subversion and political messaging. Such was Rigoletto, which was based on a play by Victor Hugo called Le Roi S’Amuse (The King Amuses Himself) — a work so blatantly anti-monarchal that it was banned immediately after its premier performance in Paris in 1832.

By the late 1840s, when most of Northern Italy was in the hands of the Austrians, official government censors had little patience for entertainment that was critical of ruling monarchs and might encourage the growing calls for a unified independent Italy. After all, it was well known that Verdi was a supporter of Italian independence and even his name was used as propaganda because its letters formed an anagram for Vittorio Emmanuele Re D’Italia (Victor Emmanuel, King of Italy). In those days, a scrawled graffito or a shout from the balcony proclaiming “Viva Verdi!” had a meaning that commingled artistic appreciation with nationalistic fervor.

Before Rigoletto even opened, the Austrian military governor, one Chevalier Gorzkowski, forbade its public release, calling it “a repugnant [example of] immorality and obscene triviality.” Of course, that didn’t stop Verdi; the king was changed to a duke (a scion of the Gonzaga clan from Mantua, a family that had already died out) and some of the more licentious scenes were revised or deleted. It opened to great acclaim in 1851.

To Director Mark Lamos’ credit, some of the original sense of licentiousness that Verdi intended has been instilled back into the current production. In the grand, chaotic ballroom scene that opens the opera, the ladies of the court are all dressed in rich dark gowns that emphasize their décolletage — the tops of their gowns are slung down so low that their entire breasts appear to be presented in a most revealing and alluring manner. With their sparkly capotain hats, Van Dyke shirts and pumpkin breeches, the men mostly look like foppish variations on Sir Walter Raleigh.

But the court jesters are the real visual treat here — exaggerated masks, human and animal, along with colorful garb and silly hats give the sense that we are seeing characters straight out of the Commedia dell’Arte. They prance and caper about the stage, making fun of all. Notably, the music follows these conversational flights, helping to define each character as they speak in turn.

It’s here we first meet the main characters, the womanizing Duke of Mantua (sung by Arturo Chacon-Cruz) and the hunchbacked jester Rigoletto (sung by Juan Jesús Rodriguez). Chacon-Cruz’s voice is lyrical and earnest, but he is young, and sometimes what is meant to be aristocratic arrogance comes off as jerk-boy crudeness. On the other hand, with his Latin matinee-star looks, we can see why Rigoletto’s daughter Gilda (Lisette Oropesa) falls for him. By the way, Oropesa’s honeyed crystalline soprano, combined with her angelic aura of virtue is likely to win most of the applause on any given night (Note: Oropesa, Chacon-Cruz and Rodriguez will all be replaced for the final three performances).

Rodriguez’s Rigoletto is solid, with a high baritone and blameless acting, but he somehow left me uninspired. Verdi meant for Rigoletto to be ugly and ridiculous looking — a countenance that would provide a sharp counterpoint to the tender and pathos-filled scenes of his to follow. Rodriguez, however, is tall, fit and well-built; with his bald pate, deep voice and commanding mien, he seems almost more the one to rule the duchy than his young antagonizer, the Duke.

This production last played at LA Opera in 2010, having originated at San Francisco Opera, where it has had several revivals. While most of the more recent productions of Rigoletto have chosen to place the action in campy 20th-century settings, what is notable about this one is both its historical period setting and its bold use of color and light. The set by Michael Yeargan is obviously inspired by one of those Giorgio De Chirico paintings of empty, arcaded, harshly lit buildings stretching away to vanishing points. In the extreme foreshortening of the streetscape, one is reminded of the permanent set at the Teatro Olimpico in Vicenza, Italy, designed by Palladio in 1585.

Lighting Designer Robert Wierzel positions his colored lights just right, so that the interior of rooms within the arcade are one color, say a luminous red, the rims defining doorways and windows are another, e.g. peach, while the exteriors might be lit a green that looks like malachite. In the next scene, those colors may change to maize, amethyst and periwinkle blue. It’s a fiesta for the eyes.

We last saw Conductor Mattew Aucoin leading the orchestra at Dorothy Chandler in Philip Glass’ Akhnaten. He acquitted himself well there and does so again here, albeit with tempi that are sometimes unusually fast. But he coaxes the full range of colors from the orchestra, and we can easily hear the changes of mood when the action demands it — delicate piccolo when Gilda is expressing her love, double bass and tympani when Count Ceprano makes his curse, et cetera.

Verdi ushered new forms of music into opera with Rigoletto, sweeping the older Bel Canto traditions away for good. He made his songs to be memorable, and indeed, it is said that one could hear the strains of La Donna e mobile being hummed in the streets of Venice the very next day after its premiere. It is through Verdi’s understanding of fitting music to mood and his ability to make tunes everyone could remember that he remains one of the most masterful of opera composers.

Rigoletto is a wonderfully written opera. It showcases a panoply of different moods and aspects of the human condition. It has about everything you could want in a tragic opera: love, lust, murder, mistaken identity, grief and triumph. This production, while not breaking any new conceptual ground, shortchanges neither the emotional complexity nor the leading role of the music, and so must be regarded as a success. It’s the final full-blown production of the season, so now is the time to book tickets.