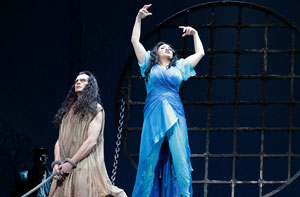 LA Opera delivers a creepy valentine this month with Richard Strauss’ “Salome.” Of course, creepy can be good in the right hands. (Think “Fatal Attraction.”) And in the hands of Strauss and Oscar Wilde, from whose play the composer got his libretto, we get an intense, sometimes unsettling and still  (c’mon, a little bit?) shocking immersion in lust, incestuous desires, revenge and murder.

The one-act opera opens with Salome’s attempted seduction of Jochanaan (John the Baptist). Her repeated desire to touch his skin and hair and kiss his mouth is almost cringe-worthy, making the audience both laugh and groan. It ends with the infamous seductress’ long soliloquy to Jochanaan’s severed head, which she kisses. Is Salome a monster as Herod claims? No, she’s a fragile young woman who discovers that “the mystery of love is greater than the mystery of death,” and Racette brings out every nuance of the role.

Racette becomes Salome. She’s had some practice this season, having performed the role for the Met and Pittsburgh Opera. For an opera star over 50, she does a remarkable job of portraying a playful Salome in the opening, then dancing provocatively (and ending naked) for her lecherous stepfather, King Herod, in the famous “Dance of the Seven Veils,” stubbornly demanding her revenge, and finally giving us a window onto madness. Racette is fearless. Her complete absorption in one of opera’s most demanding roles is nothing less than awe-inspiring. This is Salome’s opera, and it was Racette’s at the Dorothy Chandler Pavilion. The other characters are almost insignificant, mere pawns to move the story along.

LA Opera’s 1998 Peter Hall production “played an important early role in bringing LA Opera to international attention,” Plácido Domingo reminds us in his program note. It stands the test of time. The refurbished sets by John Bury consist of an impressionistic backdrop, patterned floor and “cell” for John the Baptist, as well as a drop-down chandelier for the party and dance. Sara Jean Tosetti’s new costumes, with gold and brocade and silk, are fabric bling, taking us back to the Near East just as Mozart’s “Abduction From the Seraglio” did last month.

Strauss’ music for this opera, like Stravinsky’s “Rite of Spring,” was revolutionary. As Music Director and Conductor James Conlon wrote: Strauss made the orchestra a protagonist that “brutally imposed itself on the audience.” ‘Salome’ was a lightning blast that ignited opera in the 20th century.” It still does.