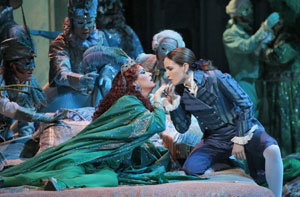 Quick — name three opéras fantastiques. That’s a tough one. About the only one that comes to mind is The Tales of Hoffmann. LA Opera’s enchanting production — playing through April 15 — offers a delightful mix of lilting romantic music, beautiful sets and eye-catching costumes.  It is also an unusual family collaboration, celebrating the various talents of the dual Domingos: Marta who conceived and directs the opera, and Plácido, her husband and artistic director of LA Opera, who conducts the orchestra.

The opera, composed by Jacques Offenbach, recounts three tales told by a bon vivant named Hoffmann. For those not acquainted, the name refers to a real person: E.T.A. Hoffmann — a German Romantic figure few Americans are familiar with, but they should be as he had a strong influence on many titans of fiction such as Gogol, Baudelaire, Dickens, Dostoyevsky and Kafka. In a multiplicity of roles that included composer, music critic, jurist, caricaturist and theater director, Hoffmann packed a lot into a short life, dying of syphilis in 1822 at age 46. Curiously, Hoffmann’s tombstone — located in a churchyard in Berlin — only refers to him as a poet and a painter. Nevertheless, Hoffmann’s short stories focusing on the macabre or fantastical were adapted by artists as diverse as Tchaikovsky (The Nutcracker) and Edgar Allan Poe (Murders in the Rue Morgue).

Offenbach’s opera is actually about Hoffmann himself — as a fictionalized dissolute poet who is trailed on his adventures by the disguised Muse of Poetry, who seeks to convince him to dedicate himself to his art. The opera is in five acts — the three tales bookended with prologue and epilogue. The structure and stories are complex, and certain singers play multiple roles, leading to moments of confusion, especially when things take a turn for the fantastique. But therein lies the fun.

Hoffmann regales his admirers in the depths of a tavern with three tales. The first recounts Hoffmann’s courting Olympia, whom he thinks is the beautiful daughter of an inventor, but in actuality is an automaton. The second tale involves another woman, Giulietta, who is bribed by the diabolic Dappertutto to steal Hoffmann’s shadow. The final tale tells of Antonia, who has the most beautiful voice, but is forbidden by her father to use it lest she fall victim to the same malady that killed her mother, also a singer. As Hoffmann attempts to court her, Antonia is mesmerized by the malevolent Dr. Miracle who tricks her into singing until she dies.

Because of the way the opera is set up, there are more principal singers than normal, even though four play multiple characters. In this production, it is the female singers that really shine. While Vittorio Grigolo does fine as Hoffmann, it is So Young Park as Olympia, Kate Aldrich as Giulietta and Diana Damrau as Antonia who really stand out. And I should add Kate Lindsey as The Muse/Nicklausse to this list as well.

Of course, the singer that most opera lovers are excited to see is German star soprano Damrau who is making her LA Opera debut. I can report that her voice is indeed glorious and that she is strikingly beautiful as well. Unfortunately, her role as Antonia is limited and she is really only singing for about 15 minutes total. We can only hope she will be kind enough to revisit us in the not-too-distant future. Damrau’s husband, Nicolas Testé (also in his LA Opera debut), gets a meatier part — he plays four roles, his baritone impressive and ominous as Dr. Miracle, Dappertutto, Coppelius and Lindorf.

This is a co-production between the Mariinsky Theatre, the Washington National Opera and LA Opera. Most of the scenery, set design, furnishings and costumes are from various workshops in Rome and Milan, and it shows. They are dramatically beautiful and creative at the same time and provide an air of glamour and mystery to the proceedings.

Offenbach was primarily a composer of operettas (more than 100), and the light, lyrical music makes it seem as though Wagner and his influential complexities never existed. Unfortunately, Offenbach died four months before his opera opened in 1881 so he never saw it performed except in rehearsals. Maestro Domingo drives the music forward with lots of energy and zest, and it seems he is just as comfortable conducting as singing.

With such sweet sounds for the ears and such rich treats for the eyes, The Tales of Hoffmann is a feast for the senses that will leave even jaded operagoers well satiated.