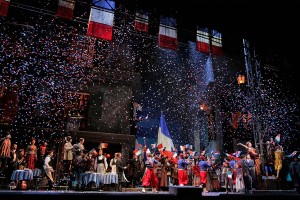 I’ve lost exact count, but this is LA Opera’s sixth or seventh revival of the Herbert Ross production of Puccini’s “La Bohème,” first launched in 1993. Depending on how many times inveterate operagoers have seen this production, one could hope for a new one. However, this remains one of the more detailed and impressive sets in rotation, and it is no discredit to the opera to get maximum use from it. Director Peter Kazaras doesn’t stray far from the conventions of the 2012 production (reviewed on Culture Spot).

We know that it is 1888 (some 40 years later than Puccini’s original setting), because we see the partially completed Eiffel Tower rising in the background. We also see bicycles and, in the café scene, a motorcar. The two-story apartment and café allow for action to occur on the vertical as well as horizontal planes. The generally shabby conditions of Belle Époque Paris lend an evocative feel to the entire set.

Most, but not all, of the singers have changed since the previous production. The exception is Janai Brugger who sings Musetta. As in 2012, she plays her flirt with a combination of brashness, smoldering sexuality and petulance that is fun to watch. The lead role of Mimi is sung by Georgian Soprano Nino Machaidze, who plays her character with an amiable and eager spirit. Her voice is a bit darker than many sopranos, so she doesn’t quite come off as the delicate, shy creature that Puccini seems to have envisioned.

The men are entertaining as well. Guatemalan tenor Mario Chang sings Mimi’s lover Rodolfo. His youthfulness and distinctive voice do credit to the role. Baritone Kihun Yoon, who was so impressive as Sharpless in “Butterfly” earlier in the season returns as Schaunard and continues to excel. Giorgio Caoduro makes a handsome Marcello and his fluid velvety voice is supremely easy to listen to.

Audiences should be aware that the roles of Rodolfo, Musetta and Mimi are shared with other singers throughout the run, so it is likely you will see different than the above. The same holds true with the musical direction. The conductor for most of this run is an Italian lady with the most lovely name — Speranza Scappucci — and she does a commendable job with Puccini’s score, stressing the brass to evoke orchestral color and tone.  The final two performances will be conducted by the inimitable Gustavo Dudamel who is usually at home just across the street in Disney Hall with the LA Philharmonic. This will be Dudamel’s LA Opera debut, so tickets may be at a premium, but the music should be just dandy with either maestro.