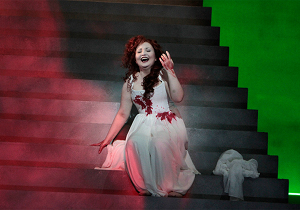 To composer Gaetano Donizetti, Scotland was a mysterious realm of forbidding landscapes and fierce tribes, no less exotic than an Arabian souk. A real incident in the 17th century, in which Scotswoman Janet Dalrymple stabbed her husband on their wedding night, provided Donizetti the inspiration for his 1835 Lucia di Lammermoor, a compelling story that is also one of the finest of the bel canto operas.

Now understand, this is Scotland as imagined through Italian eyes. So while we do get moody, windswept moors, warring clans and passionate redheads, we also get characters named Arturo, Raimondo and Enrico, all singing in Italian. It has the same, somewhat disconcerting effect of pairing a Missoni top with a tartan kilt, or using haggis as a pizza topping. Nevertheless, this Lucia satisfies on a number of levels.

LA Opera’s production sets a properly atmospheric mood from its opening. We are in a graveyard enshrouded with mist, surrounded by projections of headstones. A group of mourners is gathered around two tombs. The music swells to a sudden crescendo, and a figure rushes forward to embrace the sepulcher. More projections follow in the next scene in which a series of prickly green stems twists and turns in every perspective. The accompanying music is solo harp, and we realize these thorny, thistle-like shoots are also the vibrating strings of the harp. Ingenious.

The costuming by Christine Crook meshes well with the set design. The female chorus wears upswept red-haired wigs paired with deep-green velvet dresses. The men are more severe, usually in black, and (unusually) none wearing kilts. The reliance on projections as substitutes for carpenter-built sets may bother some, but I felt that the novelty of rapid changes in location and perspective made the trade-off worthwhile.

The highlight of this opera, however, is the music and the singing. Bel canto being what it is, the score as interpreted by conductor James Conlon and orchestra has a very romantic feel, with appropriate drama when called for. Nearly all the singers are of similar high quality, and a couple are standouts. Albanian tenor Saimir Pirgu as Lucia’s lover, Edgardo, is not only young and handsome, but he injects great passion into his vocals. His aria at the graveyard is tender and touching.

Russian soprano Albina Shagimuratova as Lucia is undoubtedly the star of the show. While she displays expert vocal technique throughout, her big moment comes in Act III when she slowly descends a staircase, after having stabbed her unwanted husband. Her dressing gown covered in blood, she is mute, frozen, dispassionate, like a Mayan priest after the sacrifice. In the long solo that follows, we slowly absorb both the nature of her crime and the extent of her madness. Shagimuratova shows off both her strong acting technique and purity of tone during this 16-minute tour de force — which includes a mesmerizing “duet” with the glass harmonica (played by Thomas Bloch) that brought roaring applause from the audience. But she was well practiced, having just come from performing the same role to sold-out crowds at La Scala in Milan.

Lucia ranks as one of the most accessible operas, in music, concept and dramatic sweep. Director Elkhanah Pulitzer has given us a version that is contemporized, but not too much so; spare without being austere; colorful without being clownish. And the singing is superb. If this is the one opera you choose to attend this season, you will not be disappointed.