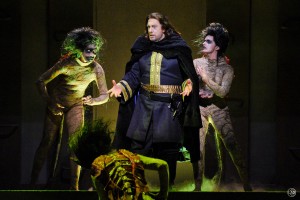 How perfect that LA Opera programmed “Macbeth” during the Halloween season. (I say season because we all know that Halloween is not relegated to just one day in Los Angeles; it’s an event on the scale of Christmas.) Shakespeare and Verdi gave us the witches and ghosts, and LA Opera added devilish beasts to the bubbling cauldron of ambition, murder and revenge. Add Plácido Domingo as Macbeth and Darko Tresnjak as director, and you’ve got a highly entertaining, artistically imaginative production that packs all the ingredients you need for a festive brew of dramatic delights.

The beasts — not present in Shakespeare’s play or Francesco Maria Piave and Andrea Maffei’s libretto — are human/feline-like creatures with snake-like tails, savage makeup and black hair standing on end. Gory as well as sinister, the flesh on their backs is torn apart revealing blood and backbone. This artistic representation of evil incarnate keeps the witches’ prophesies and Macbeth and Lady Macbeth’s evil thoughts and deeds alive like a Frankenstein monster throughout the opera, bringing an extra level of thrills to an already rich tragedy.

The beasts are represented by nimble dancers floating feverishly and threateningly through nearly every scene. Not just floating, but climbing too! The set backdrop, which changes appearance and purpose with exquisite lighting and projections by Matthew Richards and Sean Nieuwenhuis, respectively, is equipped with climbing hooks that the beasts use to slink up walls like spiders or lizards. This is all done with such acrobatic skill and artistry that there is a “climbing consultant” (Daniel Lyons) credited in the program!

With all the creepiness in the design, there is luckily some humor in the production. Even with a super-creepy scene in which the beasts haunt a nursery of “devil doll” heirs to the throne, the zaniness provides moments of comic relief. Or vice versa — in one of Macbeth’s guilt-induced hallucinations, several giant Duncan heads at first seem silly and then quite effecting. Plus, Verdi’s score for “Macbeth” is not as dark as the plot and themes. When we don’t have the agonized musings of Macbeth and Lady Macbeth, the music is often lyrical and upbeat, even cheerful at times.

It takes great singers and great actors to pull off this production. And LA Opera has them in force. The magnificent Domingo, whose powerful voice has moved from tenor to baritone, is a force to be reckoned with, and his acting chops are Hollywood sharp. The audience went wild for Domingo after his arias. How lucky we are that LA Opera’s general director takes on such juicy roles — in this production a title-role villain, no less — at the Dorothy Chandler Pavilion. As one of the most famous names in opera, it’d be a shame if he didn’t.

Ekaterina Semenchuk as Lady Macbeth was superb, and earned a lot of love from the audience for her incredible voice and her expression. James Conlon and the orchestra also shined as major stars of the night.

Domingo and Semenchuk performed “Macbeth” together in Valencia last year, and still share a potent chemistry. This is Domingo’s first time singing the role in the United States, and LA Opera hasn’t staged “Macbeth” since 1987, when Domingo made his conducting debut. So it was a special production for those reasons as well.

“Macbeth” (1847, Verdi’s first of three Shakespeare operas) is the next in a line of LA Opera productions by Tresnjak (including the double bill of “The Broken Jug” and “The Dwarf,” “The Birds” and “The Ghosts of Versailles”) who also served as co-scenic designer with Colin McGurk. Tresnjak is a Shakespeare expert, having acted as artistic director of the Old Globe Shakespeare Festival between 2005 and 2009 and directed the Oregon Shakespeare Festival, among other roles. Tresnjak’s vision is remarkable, and I add his “Macbeth” to my list of LA Opera favorites.

There is one show left for “Macbeth” on Sunday, Oct. 16, at 2 p.m. For more information, visit www.laopera.com.