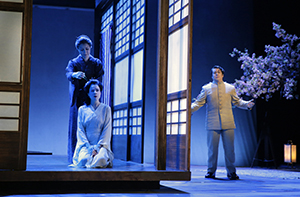 Watching virtually any production of Madame Butterfly outside of high school productions requires some suspension of disbelief. After all, the story’s protagonist Cio-Cio-San is supposed to be only 15 years old when she marries the American cad Pinkerton. Even after waiting three years for him to return, the fledgling geisha is only 18. So it is a teeny bit of a stretch to see 44-year-old Ana Maria Martinez playing the teenager. But then, what real-life teen could be capable of such a nuanced and emotionally raw performance that is now on display at LA Opera?

As an opera composer, Giacomo Puccini wrote about one theme only — the delight and pain of love. The theme is given equally grand expression in Puccini’s famous La Bohème and Tosca, but it is in his 1904 Madame Butterfly that we experience perhaps the most heart-rending situation of all: a woman whose only hope in life and love is dashed and at the same time must face losing her only child.

Many directors of the past have created their Cio-Cio-Sans with a repressed emotional range that is meant to represent the inscrutable Japanese character, but Lee Blakeley, director of this production, chose to have Martinez play the role with a more upfront display of naked emotion. In the story, this makes sense since Cio-Cio-San has renounced her native religion to become Christian and she declares that she strives to be an American wife. With this angle in mind, the casting of Martinez makes perfect sense — after all, if a woman with Latin blood can’t find her emotional expression, who can?

Regardless, Martinez does not let herself get too far out of character. She plays her role with dignity, reserve and some measure of stolidity. She has had a lot of practice over the years in this role, and it shows. In fact, she was performing the same role at the Metropolitan Opera in New York at the same time she was in rehearsals for this production. I thought her singing overall, while often lyrical and achingly passionate, was a trifle uneven, and that it was truly her impressive acting chops that ultimately got her the standing ovations and “bravas” at the final curtain.

Stefano Secco as Pinkerton didn’t leave much of an impression, although he is basically out of the opera in the second act, except for the very last part. Milena Kitic, playing Cio-Cio-San’s maid Suzuki, was enjoyable, but it was baritone Kihun Yoon playing American ambassador Sharpless who impressed most of all with his singing. Yoon, a Domingo-Colburn-Stein Young Artist, is only recently arrived from South Korea, making his U.S. role debut only in 2014, but the great strength, clarity and presence of his baritone marks him as one to watch for in the future.

The costumes are praiseworthy, duplicating the styles concurrent with the early-20th-century setting. The set is pleasing as well — a revolving shoji house with sliding wooden doors is the central element throughout, and proves very flexible for a number of different configurations. In the first act, a profusion of cherry blossoms with a large setting sun in the distance not only says “Japan,” but echoes the optimism and gaiety of the proceedings. In contrast, a somber bare-treed garden is the setting for the sad denouement of the second act. The lighting, progressively bright to dim, effectively amplifies the emotional tenor.

Music Director James Conlon once again proves why he enjoys the longevity he does. His orchestra had a great deal of dynamic impact that made the musical journey particularly exciting. Percussion was walloped to the extent I saw other musicians plugging their ears during the fortissimos. But the sweet quasi-Asian sounds of the massed violins played equally well on the other, softer end of the spectrum.

Madame Butterfly is a perennial favorite among operagoers. It offers a touch of the exotic, a sentimental love story and a bitter twist of the tragic. This production does not take many risks, and that’s mostly a good thing. What risks it does take relate to the emotional intensity that Cio-Cio-San is allowed to express, and Martinez pulls it off with just the right balance of Eastern self-containment and Western pathos. It’s a bravura performance, even if the teenager within is long gone.