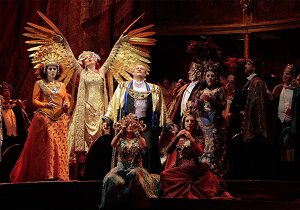 Until now, Jules Massenet’s “Thaïs” had never been staged by LA Opera. The production that opened May 16 is such a masterpiece, let’s hope they bring it back before another 28 years go by.

After experiencing LA Opera’s production, directed by Nicola Raab, it’s hard to fathom why “Thaïs” isn’t part of the standard repertoire. Except for the fact that the title role is notoriously challenging, this opera really has it all: beautiful, melodic music, including the Act II meditation with solo violin and harp, and an easy-to-follow story that is both titillating and romantic but ultimately tragic (monk meets courtesan, monk converts courtesan, monk confesses love too late). The opera is, in a word, accessible. And when done right — like it was Saturday night at the Dorothy Chandler Pavilion — it is a perfect storm of beauty.

Of course, not every production can feature the exquisite performances of Plácido Domingo and Nino Machaidze and lavish scenery and costumes by Johan Engels. French conductor Patrick Fournillier, a Massenet expert, brought a special sensitivity to the music as part of a truly global artistic team, which included a German director, South African designer and Swedish lighting designer (Linus Fellbom).

Domingo and Machaidze had performed together in Raab’s production in Seville in 2012. Domingo said in his program note as Eli and Edythe Broad General Director, “These will be my first North American performances as Athanaël, and it’s a role that I love to perform because it’s dramatically challenging, with lots of wonderful music to sing.”

Domingo, 73, has performed 25 roles to date with LA Opera since 1986 and 145 on the world’s stages. Famously one of the Three Tenors and recently adding baritone roles to his repertoire, Domingo has never shied away from vocally risky roles. Machaidze is an LA Opera favorite (“The Elixir of Love,” “The Turk in Italy” and “Romeo et Juliette”) who will return in “La Traviata” in September.

While Machaidze’s Thaïs needed to carry the opera — and did she — Domingo’s Athanaël also did some heavy lifting — it’s difficult not to be impressed by one of the world’s most acclaimed and powerful voices.

The combination of strong singing and acting earned both stars enthusiastic applause for their arias and duets. The role reversal, where Athanaël gives up spiritual love for physical desire after Thaïs abandons her vocation for religious redemption, makes for a particularly poignant story that Domingo and Machaidze convey with realistic passion and pain. They elicit heartfelt pity in the tragic final duet (featuring the Meditation theme), where Thaïs ascends to heaven without ever hearing Athanaël’s pitiful cries.

Athanaël spends the entire opera in rags, while Thaïs makes her entrance in a glamorous golden dress sparkling with nearly a hundred rhinestones. When she spreads her arms wide, enormous wings unfold, and we see her as a delicate creature who will be captured by Athanaël and saved by Christianity.

Everything is upscale and classy in this production. The characters in colorful, glittering, luxurious costumes populating an elaborate rotating theater set evoke the grandeur of Massenet’s Paris perhaps more than 4th-century Egypt where the story takes place. And Thaïs’ room is like a Renaissance painting — full of texture and color, sparkle and light — with details you could admire for hours. It effectively conveys the magnitude of what Athanaël asks Thaïs to give up for the convent. Even the monks appear in tuxes — albeit tattered and dusty in the ruinous theater of the final act with its gravestone seats and crumbling columns. A few subtle touches of sex (a lot more subtle than Sibyl Sanderson’s wardrobe malfunction in “Thaïs’” 1894 world premiere in Paris) hint at Thaïs’ iniquity or Athanaël’s buried lust: the patent leather-clad men in the first theater and the Dali-esque sand dunes resembling a nude woman as a backdrop for the final theater. When revealed, both of the theater sets drew instant applause from the audience.

In taking on this seldom-performed opera, LA Opera once again serves up a feast for the eyes and the ears, demonstrating the powerfulness not only of Massenet’s work but also of its own artistry.