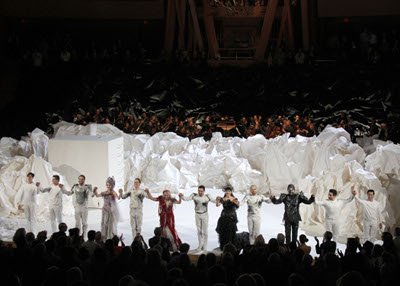 The opera event of the season is currently underway at Walt Disney Concert Hall with Gustavo Dudamel conducting the Los Angeles Philharmonic, members of the LA Master Chorale and a cadre of internationally acclaimed soloists in the first installment of a three-year plan to perform the operas Mozart composed to librettos by Lorenzo da Ponte.

The series began with performances of “Don Giovanni” on May 18 and 20 and continues Thursday, May 24, and Saturday, May 26.

On May 20, Dudamel delivered another astounding performance. Just as he does with most of the pieces he conducts, he had memorized the three-hour-long score. Not only that, he could be seen singing along with many of the arias. Remember that Dudamel is only 31 years old and that this opera requires knowing not only the orchestral parts but also the parts of eight soloists and the chorus. What can one say but “Wow!”

And it goes without saying that the orchestra, with all of its principals, performed flawlessly.

It is difficult to single out any one soloist, because all of them were outstanding, not only in their singing, but also their acting and movements, often slow, stylized and very sensual. However, Kevin Burdette who sang the role of Leporello was especially convincing, while at the same time bringing out all the humor in the role. The two female leads, Carmela Remigio (as Donna Anna) and Aga Mikolaj (as Donna Elvira), sang their respective parts beautifully. Mariusz Kwiecien impressively embodied the title role that has been a major part of his career.

It was interesting to contrast an opera performed in Disney Hall with those performed in the Dorothy Chandler Pavilion, the home of the LA Opera. In the Dorothy Chandler, as in most other opera houses, the orchestra is in a pit at the front of the stage where the singers can see the conductor in front of them. In Disney Hall, the orchestra was on risers at the rear of the stage, with all of the action taking place in front of the orchestra on the main part of the stage.  This arrangement made for a different dynamic. For starters, the singers couldn’t see Dudamel; that is why there were flat screens with a video feed of him placed strategically around the hall. Still, there were a few times when the soloists and orchestra did not come in at exactly the same time, but these were few and very far between. 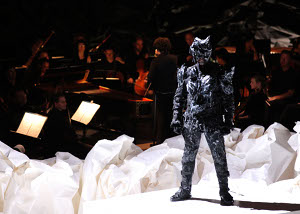 Architect Frank Gehry returned to his creation, Disney Hall, this time as set designer (credited as installations in the program), creating what can only be described as large iceberg-like structures out of enormous sheets of crumpled white paper. Sometimes the singers emerged from the icebergs, and sometimes they dissolved back into them. These installations surrounded the stage, which contained several moveable box-like platforms of different heights, also white, on which, at different times, the singers climbed. Combined with bright white spotlights, the result was one of a minimalist world not unlike the moon or some similar barren landscape. The design was important to a production in a venue that was not designed for opera productions and in which sets could not be switched out between scenes or acts and in which performers couldn’t easily enter and exit the stage.

In fact, most of the performers were on stage even if they weren’t in the scene. Modernist director Christopher Alden frequently had them lie down motionless or frozen in the position they were in when the previous scene ended. In Act II, Leporello and Don Ottavio even sang while lying on the stage or a platform. Moreover, the performers often moved around the stage in slow motion to get to their respective positions, especially when someone else was singing. The boxes and icebergs were moved throughout the production by stagehands dressed in all white who also moved in slow motion.

The overall effect of the production was to maximize the music and singing and minimize visual distraction, and it succeeded admirably. The costumes, by Kate and Laura Mulleavy of the internationally recognized fashion house Rodarte, along with hair/wigs by Odile Gilbert and makeup by James Kaliardos for NARS Cosmetics, created visually striking characters. The women were beautiful in romantic dresses, Donna Anna in white, Donna Elvira in black and Zerlina in lavender.

It was a little curious why their attire could have fit any period, but the men’s outfits definitely took a page from science fiction. Don Giovanni and all but one of the male characters were dressed alike in military-like white uniforms resembling Star Wars stormtroopers, but also reminiscent of Stanley Kubrick’s “A Clockwork Orange.” The men’s hair – like Don Giovanni’s slick, shiny, almost-patent-leather black hair – made them resemble anime characters. The Commendatore was the only male character dressed in black, appearing as the ghost in a costume that looked almost alien.

The LA Phil’s foray into opera was an impressive spectacle of music, voice and art, especially considering the logistical demands of Disney Hall. But those demands also provided for a different, but satisfying arrangement between singers and conductor and orchestra than audiences are used to. We look forward to the next installment of the Mozart/DaPonte trilogy in 2013.