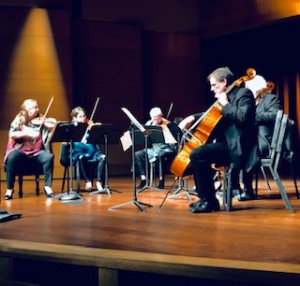 A Russian in Italy, a Hungarian in Florida and a Mexican in California. The Los Angeles Chamber Orchestra’s latest program in its In Focus series, which was held Feb. 15 at The Huntington Gardens’ Rothenberg Hall, explored the works of three globe-trotting composers whose travels (and lives) led them wandering far from their native lands.

Tchaikovsky’s Souvenir de Florence was the program’s cornerstone, and as Concertmaster Margaret Batjer reminded the audience in her brief pre-concert talk, the composer’s title is a bit of a misnomer. Tchaikovsky had composed most of the music back home in Russia and, at any rate, was not terribly impressed by his journey to Florence which ostensibly inspired this score. Its designation as a chamber work, too, is a little misleading. With its hefty four movements and brawny virtuosity, one can forgive the listener for thinking it to be a symphony transcribed for string sextet.

The LACO musicians matched its power with a vigorous performance that kept the music swinging headlong. Sensitivity and tenderness were not absent, however, with plenty on display in the moonlit slow movement, which shimmered with evocations of guitar strumming and crooning serenaders.

Ernst von Dohnányi’s early Serenade for string trio, on the other hand, was as compact and breezy as the Tchaikovsky was expansive and impassioned. A composer and pianist of distinction, he eventually ended his career at Florida State University in Tallahassee, whereupon his reputation fell between the cracks of music history. Like Alexander von Zemlinsky and Siegmund von Hausegger, Dohnányi was born in that awkward generation of composers who incrementally pushed the boundaries of musical discourse that had been set by Brahms and Wagner, but then found themselves quickly superseded by moderns such as Stravinsky, Bartók and Schoenberg. His charming score owed much to past German masters, especially Brahms, but his was a schnitzel dish that was enlivened with occasional dashes of Hungarian paprika.

The debut of a new work for piano quintet by Los Angeles-based Mexican composer Juan Pablo Contreras was the concert’s pivot point. Titled Musas Mexicanas (Mexican Muses), the work purports to briefly sketch out musical portraits of three women who have defined the Mexican nation — namely, La Malinche, Sor Juana Inés de la Cruz and Frida Kahlo — as well as offer a thumbnail synopsis of Mexican musical history. Without consideration of its programmatic elements, the music stood on its own elegantly, making clever use of the strings and piano to imitate percussion, and engaging the listener with its quirky panoply of pastiches, which unfold before the listener like a cinematic montage. This piece kept the LACO players on their toes.

Yet the program, music and actual history give rise to contradictions which the observant listener cannot ignore. If each woman depicted in the score was chosen by the composer for her strength, why was each in actuality the incarnation of defeat? Why did a work implying to be a gnomic overview of Mexican musical history exclude the musics of the rural and working classes? The last movement, with its suave conjuration of impeccably dressed ballroom dancers twirling and twisting before a soft-focus lens, would probably be unrecognizable to people living today for whom music of a rowdier nature would be more immediately recognizable as “Mexican” than what was depicted in this score’s closing pages.

Nevertheless, Contreras possesses a compositional fluency and verve which make him a talent to watch. He will assume next season the role of LACO’s “Sound Investment Composer,” offering Southern California audiences yet another opportunity to witness his own development. Perhaps by then listeners will also gratefully see him discard the well-worn crutch of program music. His bold musical idiom has no need for it.