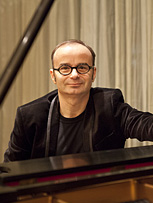 If you want to hear great chamber music performed by outstanding musicians in an intimate atmosphere where you’re only a few feet from the performers, and then be treated to Champagne and delicious treats from Patina, then you need to know about Le Salon de Musiques Chamber Music Series.

This past Sunday, concertgoers were treated to a program of works by two well-known composers — Stravinsky and Rachmaninoff — including the Suite Italienne for cello and piano by Stravinsky and the Sonata for Cello and Piano in G minor, Op. 19, and the Vocalise for Cello and Piano No. 14, Op. 34, by Rachmaninoff, performed by Principal Cellist of the LA Opera and Le Salon de Musiques Co-artistic Director John Walz on cello and Steven Vanhauwaert on piano.

Rachmaninoff and Stravinsky had many things in common, including the fact that they were born within 10 years of each other in Russia, and that for a while they both lived in Los Angeles at the same time. Artistically, however, they were quite different. Rachmaninoff composed in the Romantic tradition, while Stravinsky carved out a more modern compositional technique.

The pieces on Sunday’s program, however, weren’t that dissimilar. The Suite Italienne is Stravinsky’s adaptation of his neoclassical ballet, Pulcinella, for cello and piano. Walz and Vanhauwaert gave a very spirited performance of this Stravinsky gem. But the real treat was yet to come.

As Le Salon de Musiques Founder and Co-artistic Director Francois Chouchan pointed out before the performance, the Rachmaninoff sonata occupies a place among the great cello sonatas of Beethoven and Brahms even though it is technically a sonata for cello and piano. The piano is equal to the cello, and, as one might guess about a work for piano by one of the great piano soloists of all time, the piano part is extremely difficult. Vanhauwaert not only handled the technical demands with apparent ease and aplomb, the timbre of his playing perfectly matched that of Walz’s cello. His playing evidenced both technical skill and remarkable musicianship.

The sonata is almost symphonic in its sweep, or, as was mentioned by the performers in the conversation after the performance, it’s almost like a concerto for cello and piano. And the performers delivered a sound that was larger than the two individual instruments combined. What was even more impressive was that the two had only rehearsed a few times in the preceding week. The Rachmaninoff pieces gave Walz an opportunity to show his extraordinary talent and depth of musical expression. He didn’t just play the notes; he played long, sweeping phrases, bringing out the unabashed romanticism in the pieces. And his tone was sublime.