Review: ‘Light Up the Sky’ at the Reuben Corova Theatre 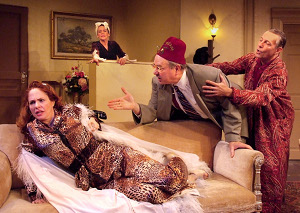 Though written in 1948, Moss Hart’s “Light Up the Sky,” with its witty barbs that ricochet amongst backstage shenanigans of a potential Broadway show, certainly holds up well in present-time viewing: Think “Spider-man, the Musical” or NBC’s cancelled “Smash.”

In Theatre 40’s production of this classic show business comedy, currently at the Reuben Corova Theatre in Beverly Hills, principals of the play-within-a-play gather in their female star’s hotel suite at the Boston Ritz Carlton during the evening of and morning after their first out-of-town tryout.

David McClendon directs his cast in broad strokes with several hysterically chewing much of the handsome 1940s scenery designed by Jeff. G. Rack. The honor of top scene-chewer must go to Arthur Hanket who inhabits Sidney the producer ever so brilliantly in his many moods and facades. Hanket commands focus whether Sidney’s in his element (success) or not (failing). As his devoted, beautiful and not-so-dumb wife Frances, Meredith Thomas gets to vividly showcase the many facets of loving partner, professional shopper of finer things and shrewd businesswoman. When Thomas isn’t sparring with Hanket, she matches wits with the droll Stella, played deliciously by Flora Plumb.

As Irene, the diva of the group and star of the play-within-a-play, Stephanie Erb makes maximum use of her chances to go way over the top, as any great diva would.

Actors playing more naturalistically (Nick Denning as the newbie playwright; Bryan Bertone as the diva’s clueless, subservient husband; Cathy Diane Tomlin as the diva’s secretary) cannot seem to make their presence felt onstage amidst those excelling in their madcap antics. Most successful in holding his own without high camp is Martin Thompson as seasoned playwright Owen, who manages to grab center stage whenever he’s giving advice or retelling theater gossip, er, stories.

In the not as broad, not as straight roles, but offering quite effective characterizations are David Hunt Stafford as Carleton and John Combs as William.

This play is not a bad way to spend an amusing (more times than not) little more than two hours experiencing what really goes on before the curtain rises in a theater.