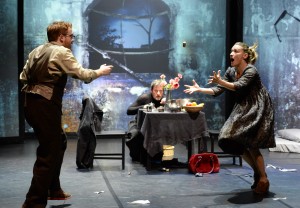 One of the most exciting cultural institutions in the LA area is, without a doubt, Long Beach Opera. With Artistic and General Director Andreas Mitisek at the helm, Long Beach Opera has become known for producing fresh, genre-defying, highly artistic and inventive operas like “Frida Kahlo” (read our review), “The Invention of Morel” (read our review) and, most recently, “The Black Cat.”

“Frida Kahlo” spotlighted a colorful female artist and historical figure who deserved an opera. “The Invention of Morel” brought the creative talents of former Police drummer Stewart Copeland to the stage, where he re-imagined a relatively obscure and intriguing piece of literature to magical effect. On Jan. 19 and 20, LBO presented the U.S. premiere of “The Black Cat,” based on a short story by Edgar Allan Poe. The idea alone sounds amazing, but then the artistic minds behind it blew the concept out of the water.

This international co-production was conceived by Martin Haselböck, Austrian conductor and artistic director of Musica Angelica Baroque Orchestra, the Luxembourg-based theater and film director Frank Hoffmann, and Academy Award-nominated Austrian film and multimedia artist Virgil Widrich. They put together an elaborate show with two dancers, a tenor, a baroque orchestra playing Bach Cantatas, and a film featuring music by an English songwriter. Bach and rock with Poe — fascinating!

The plot of “The Black Cat” is fairly simple, but the layers of psychological drama common to Poe are what the opera brings to the surface in each form of art on display. Director Frank Hoffmann said in press materials, “The stage design is foremost a film — moving images, scenes and stories. In the third dimension, the singer, the dancers and the musicians merge with the virtual space … to become one total spatial experience.”

First, but in no particular order, the film and rock music. The film projected on three screens represents the narrator’s nightmares about his past life before prison. It is also the ticking clock of the opera (sometimes literally). The dancers and orchestra must keep perfect time to be in sync with the images (which they sometimes interact with) and moody electronic music supplied by David Sylvian, a musician who you probably don’t know, but is really worth checking out, especially if you love ’80s music.

Second, the dancers. Sylvia Camarda plays both the narrator’s wife and Pluto, the cat named for the ruler of the underworld in Poe’s story. Later Jean-Guillaume Weis who plays the narrator in flashback also becomes a cat. These dancers really carry the action of the story. The sensuality and playfulness of their movement is mesmerizing and immediately strikes you as metaphorical.

Third, Poe’s story. In Poe’s story, the narrator mentions that his wife believes the superstition that all black cats are witches in disguise. He also questions whether he can trust his own senses as he tells his story. (Someone from the audience said as they left, “I don’t get it.” It helps to read the story before and after the performance because the opera is not a straightforward narrative; it’s intentionally nebulous and that’s partly why it works.)

Fourth, the orchestra and tenor. It was wonderful to hear the Musica Angelica Baroque Orchestra of seven perform so close — in the audience section to the left of the stage. Before the show, Haselböck had talked about Bach’s Cantatas, telling us that Bach never wrote an opera, but these are as close as we will get. “His work is pure drama,” Haselböck said. Originally written for Lutheran church services, the arias are full of guilt and punishment — perfectly suited for Poe’s story. The idea is genius.

And the tenor’s voice was gorgeous — despite Aaron Sheehan’s short notice in replacing Nicholas Mulroy from the world premiere production. The tenor’s role was actually split in two (singer and actor) for this U.S. premiere — four days before curtains! Because of the government shutdown, an office from which Mulroy needed a signature for his Visa was closed and he could not travel to the States. The Grammy Award-winning Sheehan stood with the orchestra and sang his part with sheet music, briefly coming onstage at the end and singing his part from a “Poe book.” The actor Jacques Schiltz had a challenge he easily rose to: he was almost entirely mute in this role (he spoke the one bit of dialogue from the original story toward the end). It all worked quite seamlessly.

Combining Poe, dance, Bach, rock, film and opera into something both poetically and artistically satisfying must have been no easy feat. With The Black Cat, LBO worked a special magic — or, shall we say, witchcraft?

Coming up next are Philip Glass’ “In the Penal Colony” and Anthony Davis’ “The Central Park Five.” Visit www.longbeachopera.org.