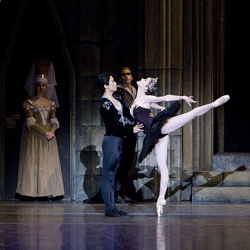 Kudos to the Los Angeles County Arts Commission and the LA Board of Supervisors, for supporting Los Angeles Ballet’s completely credible “Swan Lake” in five venues around LA County. The Arts Commission’s major funding of the production acknowledges our city’s worthiness of LAB’s continuing presence as LA’s own world-class ballet company.

The quintessential classical ballet, “Swan Lake” first appeared in 1877. The earliest of the great Tchaikovsky ballets, the music uses Russian folk music, leitmotif, and orchestral color to tell the Romantic tale of a love-struck prince, an enchanted maiden, and an evil sorcerer.

LAB’s four-act “Swan Lake” is a towering accomplishment for the 6-year-old company. As staged by artistic directors Thordal Christensen and Colleen Neary, the piece retains its magical 19th-century style and flavor, while simplifying and clarifying some of the more arcane elements. In a bold departure from most modern productions, Christensen and Neary restore the original 1877 ending, in which Von Rothbart, the evil sorcerer, is vanquished by the Prince, and dies a particularly gruesome death.

Principal dancer Allynne Noelle takes on the demanding central role — playing both the Swan Queen and her treacherous, look-alike rival. A Southern California native, Noelle has spent the better part of the past decade honing her considerable skills in such companies as the National Ballet of Canada and Miami City Ballet. Now at the peak of her artistry, her revelatory interpretation of Odette/Odile places her among the greatest of today’s American ballerinas.

Noelle’s technique is perfection — her gorgeous extensions, precision footwork, spellbinding ports de bras, and extraordinary turns take one’s breath away. But beyond these virtuoso aspects of her dancing, it is her stillness in Act 2 that is most compelling. Here is an artist imbued with that indefinable quality we name Presence. Her virtuosity has no limits. All radiance and shimmer, Noelle’s Odette is a tortured soul, yearning for release, transformed by love. Her Act 3 Odile exudes a raw sexuality that culminates as the bravura 32 fouetté turns explode in a burst of depraved triumph.

Opposite her, Kenta Shimizu’s Prince Siegfried is flawless. The steadiness of his support and ease in the lifts enhance his partner’s transcendent performance. Currently enjoying an ever-increasing international career, Shimizu’s cool elegance and regal bearing are a perfect complement to Noelle’s emotional style.

Alternating with Noelle and Shimizu as the hapless lovers are Allyssa Bross and Christopher Revels. Discovered by Christensen and Neary during the month-long 2010 LAB Summer Intensive, Bross entered the company as a soloist during season five, rising within months to principal dancer. Her performances as Marie in “The Nutcracker” and as last season’s ethereal Giselle garnered national attention. In her first “Swan Lake,” Bross impresses with her stylistic purity and luminous characterization of the Swan Queen. Her Act 3 Black Swan is icy, treacherous; in her ultimate victory over Revels’ callow Prince, her seductive smile becomes a sneer of contempt. Gifted with exceptional grace and beauty, a solid technique, and formidable physical stamina, this young artist is clearly one to watch.

Audience favorite Revels brings an earthy sensuality to his first performances as the Prince. Having partnered Bross for “The Nutcracker,” “Raymonda Variations,” and “Giselle” last year, the pair have an easy rapport and a convincing chemistry together. This young man is gifted with a charismatic presence and a devil-may-care fearlessness that make his every entrance electrifying. Particularly impressive are his huge floating leaps, great strength in the lifts, and phenomenal endurance. Last year a nominee for the prestigious Princess Grace Award, at 20 years of age he continues to develop his prodigious talent under the inspired mentoring of Christensen and Neary.

As the evil von Rothbart, Nicholas De La Vega owns the stage. His dancing has about it a fatal glamour. LA balletomanes will remember his definitive Drosselmeyer in last December’s “The Nutcracker,” and his powerful performance in last season’s Sonia Tayeh world premiere, “My Greatest Fear.” De La Vega’s rapier-thin physique and flashing eyes are also featured in the April issue of Marie Claire magazine.

Brilliant soloists aside, “Swan Lake” ultimately succeeds or fails on the strength of the women’s corps de ballet. Perhaps the greatest achievement of this production is LAB’s peerless ranks of swans. Every back has the same arch, every arm exhibits the same pure line from shoulder to fingertip, every neck is identically poised. Gliding across the stage in perfectly synchronized bourrées they are stunningly beautiful; in their moments of stillness, they are a living work of art. The second act Dance of the Cygnets is hypnotic as a petite foursome, arms interlaced, drill out perfectly coordinated pas de chats and échappés. This tour de force is all the more impressive considering that apprentice Sophie Silna, a product of the LAB School, stepped in to replace an injured colleague on a mere two days’ notice.