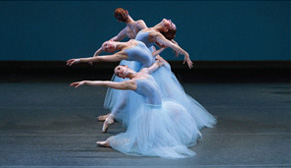 With “See the Music, Hear the Dance,” an evening of three challenging choreographies by George Balanchine at UCLA’s Freud Playhouse, Los Angeles Ballet has reaffirmed its ascendance as the ballet company for which Los Angeles has waited decades.

Chosen from the vast catalogue of works from Balanchine’s prodigiously long career, the LAB premieres of “Kammermusik No. 2” and “Tchaikovsky Piano Concerto No. 2,” as well as the reprise of “Serenade” from season one, give local audiences a glimpse into the limitless creativity of the greatest of 20th-century choreographers.

As usual, Co-Artistic Directors Colleen Neary and Thordal Christensen greeted the packed auditorium. After a brief description of the dances and a couple of anecdotes about Neary’s work with Balanchine, the couple stepped offstage, and the curtain rose on “Serenade,” the first of Balanchine’s creations after arriving in America in 1933. The perfection of the pale blue tableau of LAB’s women’s corps de ballet elicited spontaneous applause from the audience. With its kaleidoscope patterns of razor-straight lines melting into liquid curves, the piece showcases what has been perceived as LAB’s greatest strength: the flawless precision of the women’s ensemble.

With “Kammermusik No. 2,” the company has taken another huge step forward. The dance features two couples backed by an eight-man ensemble. In last year’s “Prodigal Son,” though the men’s corps showed their technical proficiency and strength, they had not quite homogenized their collective ears to Prokofiev’s score, such that they could dance together with absolute precision. But what a difference a year makes. The Hindemith piano/chamber ensemble opus is very difficult, but the group’s solid, cohesive musicianship allowed them to move as one through the avant garde combinations.

Unleashing powerful, lightning-fast athleticism coupled with uncanny fluidity, Melissa Barak commands the stage. There is, apparently, nothing she can’t do. She is surely in her element in this piece. Her partner, the long-limbed and majestic Andrew Brader, is a perfect foil for Barak’s abandon. His stunning lifts break laws of gravity. Shadowing Barak is exuberant Grace McLoughlin, who danced an endearing Effie in last year’s “La Sylphide.” Her diminutive size belies a large personality, and she expertly “works the room” for laughs during a series of Charleston-on-steroids maneuvers. Rounding out the quartet of soloists, veteran LAB principal dancer Drew Grant guides his compact frame through the blazing pace with confidence and discipline.

The final work, “Tchaikovsky Piano Concerto No. 2,” is Balanchine’s 1973 revision of his “Ballet Imperial” from 1941, and it utilizes every resource available to dazzle and astonish.

Monica Pelfrey shines in this very classical Balanchine homage to Petipa. Grand breadth of gesture and superb balance distinguish her dancing. New to LAB as the Rose in the recent “Nutcracker,” one is confident that she will adapt her “English Royal Ballet” style as she relaxes into this very “American” company. Also new to the company, Zheng Hua Li is a surprise as the romantic cavalier, after his witty Mouse King in “Nutcracker.” His beautiful, expressive face is no small asset, and his feet are about as perfect as feet get. The audience rewarded his clean execution of double tours-en-l’air and big, floating jetees with enthusiastic applause.