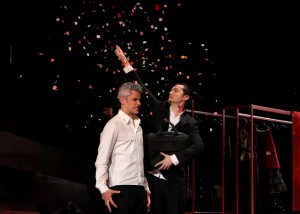 The Los Angeles Philharmonic’s production of “The Marriage of Figaro” this month marks the second installment in the Mozart/Da Ponte Trilogy, the Phil’s three-year plan to perform the operas Mozart composed to librettos by Lorenzo da Ponte. Culture Spot called last year’s “Don Giovanni” “an impressive spectacle of music, voice and art.” The current opera, continuing May 23 and 25, is another superb production demonstrating the Phil’s ambitious artistic energy.

Last year Gustavo Dudamel conducted the orchestra onstage, but behind the singers. This year, they were out front and practically became a character in the opera. It was an ingenious decision to make this change: By bringing the orchestra front and center, the LA Phil transformed the experience of opera through a simple equalization of music, voice and visuals — and through playful interaction between all of the artists.

In both productions, it was a rare treat to watch the conductor and musicians outside of the traditional orchestra pit. But in “The Marriage of Figaro,” with the stage also encircling the orchestra, singers were able to interact with them in highly entertaining ways that enhanced the opera buffa playing out before us and added a special vitality to one of the most-performed operas in the world. Director Christopher Alden and the singers had some very clever ideas. For example, Figaro shared a letter with Dudamel as he passed the podium, and Count Almaviva borrowed a mallet from the timpanist. Don Basilio’s entrance was absolutely brilliant, and there were many other comical surprises. Adding to the playful atmosphere, the musicians would sometimes turn in their seats to watch the entertainment unfold onstage when they weren’t playing their instruments.

Alden emphasized the sensuality of the opera without going overboard, and even added some hints of darkness that kept the comedy more naturalistic than farcical. The mood was perfect for this Mozartean feast of love and lust, deception and disguises — played as lively as a Shakespearean comedy of errors by an outstanding international cast.

And when you’re listening to Mozart played by the LA Phil, how could you possibly be disappointed? Dudamel often wore a smile and sang along as he worked his usual exuberant magic during the May 19 show, delivering another world-class performance from the orchestra, which featured many of the principals, including Concertmaster Martin Chalifour. Robert Morrison deserves a special shout out for his masterful playing on the continuo harpsichord, with David Heiss on continuo cello.

Christopher Maltman as Count Almaviva and Dorothea Röschmann as the Countess had the strongest voices, and together with Rachel Frenkel in the gender-bending role of Cherubino, earned the most enthusiastic cheers from the audience at curtain call. For the most part, the men were better able to play up the comedy than the women, and Maltman and Edwin Crossley-Mercer as Figaro gave wonderful, inventive performances, with Frenkel not far behind.

Installations by Pritzker Prize-winning architect Jean Nouvel and lighting design by Aaron Black set the mood to great effect, with an emphasis on red and black and dappled patterns of light on the beautiful Disney Hall stage. However, Couturier Azzedine Alaïa’s costumes felt uninspired in the first two acts and, though slightly improved in the final acts, looked for the most part as if they could have been purchased off the racks of an LA shop (the textiles hanging in Countess Almaviva’s wardrobe onstage looked more interesting). The costumes generally failed to convey a specific time period, place or mood — something that clothing can usually do quite easily.

Despite the French designers and even perhaps the French origins of the opera (in Pierre-Augustin Beaumarchais’ play “La Folle Journee, ou Le Marriage de Figaro”), there wasn’t a palpable French theme, or any theme for that matter. When it comes to design, it’s difficult not to compare this opera to “Don Giovanni,” where Frank Gehry and the Mulleavy sisters set the bar high with a cohesive and imaginative style.

The staging in the last two acts had a number of problems, including hanging scrims that partially obscured subtitles and reflected light on a section of the audience that could be seen shading their eyes. The belabored set change activity before act four was painfully obvious since there hadn’t been anything noticeable before that, and the resulting setup was not worth the wait: umbrellas suspended from the ceiling ended up completely blocking one subtitle screen and the view of the stage of some audience members. Two chairs were placed so that only a very small portion of the audience could see the singers who sat in them; but luckily they were only used for a couple minutes (so why use them at all?).

Disney Hall was not designed for opera, but you wouldn’t know it from these productions; it felt like the perfect venue. We hope the art form becomes a regular part of the programming beyond next year’s “Così fan tutte” as well. Bravo to Dudamel and the LA Phil for taking on an artistic challenge with creative vision.