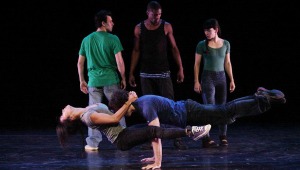 Avant-gardistas may well ask themselves, which Lux Aeterna are we talking about here? There are at least a dozen musical works — some relatively well known — that go by this Latinate form of the phrase “eternal light.” But this Lux Aeterna is only peripherally about music — it’s a dance company, and if you haven’t heard of them yet, you will. Their performance on Oct. 30 at Théâtre Raymond Kabbaz in Century City showed why.

The founder of Lux Aeterna is Jacob “Kujo” Lyons, a longtime luminary of the b-boy/breakdance scene who founded this Los Angeles-based company in 2006. While breakdancing moves are clearly visible in many of the routines the group delivers, Lux Aeterna has broadened its outlook considerably into an interdisciplinary dance and physical theater company. By studying modern dance and ballet, and spending time with troupes like Diavolo and Cirque du Soleil, Lyons demonstrates that he has absorbed these influences, but offers them up in a unique conflation all his own.

The evening began with two short pieces — the first a duet with Lyons and Teresa Barcelo that offered a taste of the circus acrobatics-meets-breakdance vibe, served with humor and pathos. Next up was a short solo performance by Ricardo Rodriguez, Jr., who took the popular ’80s dance conventions of popping, locking and moonwalking to another level. He broke his slow motion moves down into snapshot components like an old flickering movie reel, creating for dance a simulacrum of what cubism did for art.

The main piece of the evening was called Eponym — its Los Angeles premiere. It is quite a long piece, with around a dozen “movements,” but each was varied enough that there was always a sense of surprise and delight when they intro’d some outrageous new move. The five dancers in Eponym included Lyons and Barcelo, as well as Wendy Lam, Gev Moanoukian and Lamonte Goode. The latter must be singled out for his feats of strength, balance, flexibility and athleticism that astonished the audience. There were solos, as well as all manner of combination, and the pacing ranged from manic to reflective. Also fascinating was a scene that involved the two women winding themselves up and tumbling down lengths of fabric hanging from the ceiling. The crowd loved watching Lux Aeterna, and I suspect this will open more doors for them both here and abroad.

It is worth noting that Théâtre Raymond Kabbaz (on the campus of Le Lycee Francais school next to Fox Studios) has a full schedule of cultural events with a decidedly international flair. The famous Portuguese fado singer Ana Moura appears Nov. 14; Tears of Joy Theater presents a family-friendly puppet version of scenes from 20,000 Leagues Under the Sea on Nov. 19; and the Ukrainian folk-punk band DakhaBrakha appears Dec. 7. The 220-seat theater is an attractive and convenient venue to see a variety of international culture, often with a French emphasis and at reasonable cost. It’s definitely worth checking out.