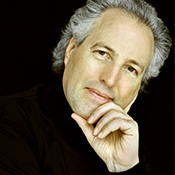 On Nov. 23 at Walt Disney Concert Hall, Austrian conductor and Music Director of the Pittsburgh Symphony Orchestra Manfred Honeck led the LA Phil in an all Dvořák program, including the Carnival Overture, Op. 92; the Violin Concerto in A minor, Op. 53, with soloist Frank Peter Zimmerman; and the Symphony No. 8 in G major, Op. 88.

From the first few bars of the Carnival Overture, it quickly became apparent that Honeck was going to put his own stamp on the music as he has in his recordings, for example, his new CD of Strauss tone poems with the PSO (see our review). Honeck isn’t shy about exaggerating tempos and dynamic markings to make his point, and it makes for fascinating music making.

The overture opened briskly, and Honeck massaged its changing tempos and moods, from the depiction of the noisy and spirited carnival to the longing of the pair of strolling lovers depicted in the development section (Andante con moto) to the rousing conclusion. The only complaint is that he used a score for this approximately 8-minute overture, and his page turning became so furious toward the end as the tempo accelerated that it was distracting to watch him.

For the concerto, Zimmerman stood well behind the front of the stage, almost within bow reach of Concertmaster Martin Chalifour and Principal Cellist Robert deMaine. The only reasonable explanation for his standing so far back was that he and Honeck could watch each other without turning their heads. Regardless, Zimmerman showed why Joseph Joachim, the violinist for whom the piece was composed — and forgetting that Dvořák himself was a violinist — considered some parts of the concerto too difficult to play. Zimmerman negotiated these difficult passages with ease, although his energetic playing did result in sacrificing some horse hairs on his bow which, during one brief pause, he yanked out. Hearing the Dvořák violin concerto was a reminder of what a great and satisfying concerto it is, both melodically and structurally. Too bad it isn’t heard more often in the concert hall.

But Honeck saved his best for last with the Symphony No. 8, which he did conduct without a score. The symphony is a crowd pleaser anyway with its beautiful melodies and rich orchestration; and, of course, the fourth movement ends in a fury of brass and percussion. The lyrical beginning of the first movement in G minor belies the cheerful mood and the G major key of the rest of the movement and the symphony as a whole. Honeck once again exaggerated the dynamics so that the pianissimos were barely audible, and he made sure that even the smallest phrases by individual instruments could be heard.

Honeck is an exciting conductor, and that excitement spread to the orchestra and the audience who erupted at the conclusion of the boisterous overture, even though credit also goes to Dvořák. At the end of the concerto, the audience cheered, but, oddly, despite Zimmerman’s extraordinary playing, did not give him an ovation or call him (or Honeck) out after Zimmerman’s only solo curtain call. Perhaps it was because it was an afternoon performance. The audience did, however, show their standing appreciation at the conclusion of the symphony, and Honeck was left beaming.

For information on upcoming concerts at Disney Hall, visit www.laphil.com.