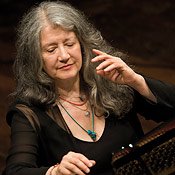 The Rachmaninoff was originally scheduled for the second half, but right before the artists came out on stage an announcement was made that one of them had an injured hand and the other had a broken tooth, and, therefore, the Rachmaninoff would open the concert. There was no explanation for why those problems would force a schedule change. The only possible reason could be that the Rachmaninoff was the more challenging piece and it would have been more taxing to play after playing all the Debussy. As the performers were playing, it was difficult to tell who had the injured hand.

Interestingly, the two pianos were placed side by side, rather than the traditional back-to-back for a two-piano recital, which was great for those sitting in the Orchestra East section, but not for those sitting in the Orchestra West section. One reason might have been because Kovacevich’s piano stool was significantly lower than Argerich’s which might have made it difficult for her to see him in the traditional arrangement.

The first half was devoted to the Symphonic Dances, which though interesting in a two-piano arrangement, cannot match the brilliance of the original orchestral version. The two-piano arrangement is muddy, with the two pianos indistinct in several places, and the performers didn’t quite always seem in sync. However, even in a less than ideal form, it is a wonderful piece. 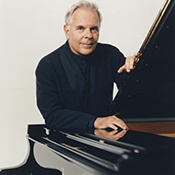 After intermission, Argerich and Kovacevich played the three Debussy works, two of which, Lindaraja and En blanc et noir, were originally written for two pianos. And Debussy himself scored Prélude à l’après-midi d’un faune for two pianos. As a result, the Debussy was much more satisfying than the Rachmaninoff. The two piano parts complemented each other the way a left and right hand in a one-piano work do. And the colors and sonority achieved by both pianists were remarkable, although at times it seemed as if the usually fiery Argerich was having trouble containing herself.

Argerich and Kovacevich performed three encores (the Dance of the Sugarplum Fairy from Tchaikovsky’s Nutcracker, a Brahms Liebeslieder, and a different version of the Debussy Lindaraja), and the audience got to see them chat about what to perform and how to arrange the piano stools.

It was clear that the crowd was there to see the legendary and mercurial Argerich, who although 75 years old, doesn’t seem to have lost much of her pianistic luster. But it was also a pleasure to get to hear the LA-born Kovacevich. To see — and hear — them both together, however, was the real treat.