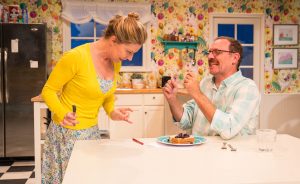 I am always eager to see the work of young, emerging playwrights. What are they thinking about? What are their influences? Will they succeed in offering something fresh? Many viewers may indeed judge Mary Laws’ Blueberry Toast as fresh and tasty, while others may push the plate away in horror, but there’s little likelihood that you will be left unfazed or indifferent. It is an over-the-top experience and pulls no punches with its mix of comedy and horror. Blueberry Toast, presented by the Echo Theater Company, continues through Oct. 24 at Atwater Village Theatre.

Laws has that fresh-scrubbed, clean-cut look of the girl next door, which she no doubt was in her suburban Texas town. However, growing up, dark misgivings nagged her that all was not what it seemed below the veneer of manners and appearances of friends and neighbors. Of course, the dark underbelly of American suburban life has been a perennial source of material for American writers — think David Lynch’s Blue Velvet, for example. But it was not until enrolling at the Yale School of Drama that she was able to more deeply explore these issues and she began to develop Blueberry Toast in workshops there.

You would be hard pressed to witness a more harrowing descent from seeming normalcy into madness and chaos than in Blueberry Toast. The name comes from a breakfast dish dreamed up by Barb (Jaqueline Wright), the chirpy, cheery wife of Walt (Albert Dayan), a mild-mannered bespectacled schoolteacher. The play opens in a cheerful, sun-filled suburban eat-in kitchen. It is morning and Barb encourages Walt to eat her concoction, which appears to be a moist compote of blueberries heaped on some toast. Problem is, Walt doesn’t want to eat it — even the words moist and compote are repellent to him. As she robotically keeps replacing the rejected meal with another round of the same dish, Walt begins to lose it, which triggers the descent into hatefulness and ultimately violence.

Meanwhile, their two children, Jack (Michael Sturgis) and Jill (Alexandra Freeman), are rehearsing a play they have made up, a drama-within-a-drama, which gets more and more bizarre as they return periodically to show their parents the newest parts. The kids’ play, of course, mirrors the embattled state of affairs between their parents, but the kids seem to take little notice of the increasingly disheveled and even bloody mien of their parents. It’s all really quite silly and provokes some belly laughs, but it’s hard to keep laughing when the calumny and violence escalates to the extreme levels that it does. Laws said she wanted the play to be funny and scary, and I can assure you she has succeeded in that.

I won’t spoil things by revealing just how far Laws takes things, but I will tell you that it’s farther than you’d expect. Director Dustin Wells amplifies the stark contrast between the way things seem and the way they are via clever choices in costume, lighting and set design. The normal accoutrements of a kitchen, like eggs, flour, whisks and hand towels become weapons or simply the detritus of bloody battles fought.

I wouldn’t say that Blueberry Toast has anything particularly deep to say — it is more akin to a Roman spectacle in the Coliseum than any kind of nuanced view of bourgeois life that we might see in a Chekhov or Albee play, for example. But Laws has a unique and interesting vision, which is already being recognized, judging by her burgeoning success writing for edgy TV shows like The Preacher. I, for one, will be keeping a sharp eye out for her future projects in film and theater.