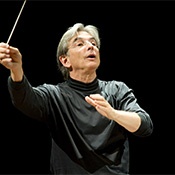 What do you get when you put together one world-renowned British orchestra, one electrifying Chinese piano soloist and one distinguished American conductor? You get one unforgettable concert. On Tuesday night, the esteemed London Symphony Orchestra was led by its principal guest conductor, Michael Tilson Thomas, in a program of works including the Four Sea Interludes from Peter Grimes by Britten, the Piano Concerto in F by Gershwin with Yuja Wang as soloist, and the Symphony No. 2 in D major, Op. 43 by Sibelius.

In the tradition of German orchestras, the members of the LSO all entered at the same time to the polite applause of the audience. But when Tilson Thomas entered, there were screams, perhaps because he is a hometown boy, born, raised and educated in Los Angeles (at the USC Thornton School of Music). In a similar Germanic tradition, there were only about 25 women in the LSO, with most of those in the string sections.

Tilson Thomas opened with Britten’s Four Sea Interludes from his opera Peter Grimes, all played without breaks. This performance stood in contrast to the one a little more than a month ago by the LA Phil directed by the young Slovakian conductor Juraj Valčuha (see http://culturespotla.com/2015/02/review-martha-argerich-performs-schumann-with-the-la-phil/). Maybe it’s because the orchestra on Tuesday night was English and the piece was composed by an Englishman. Or maybe it’s because a 70-year-old seasoned conductor understood the nuances better, but the result was a comparatively subdued performance that didn’t bash the listener over the head with the brass fortissimos. This was a restrained performance that fully evoked the mood of each interlude.

When I first saw the 2015 schedule for Disney Hall, I thought it somewhat odd that Wang was going to play the Gershwin. But, then after watching and hearing her, I realized that in many ways she is just right for the piece, especially with Tilson Thomas, himself a pianist — and American — at the helm. The piece needs a young and brash soloist, and Wang not only possesses those characteristics, but also has the technique, even if it was a little stiff at times.

Although the orchestra at times played at a volume that overshadowed the piano part, it was easy to understand why a conductor would encourage that; the Gershwin brims with jazz rhythms, and one could see the members of the LSO keeping beat with their heads and feet. Wang herself was bouncing up and down on the piano bench, and it was difficult for the listener not to get caught up in the exuberance of both conductor and players. The trumpet solo in the second movement was played so smoothly by the Principal Trumpeter, one might have thought he was American. Tilson Thomas appreciated it because he had him stand twice.

Afterwards, Tilson Thomas joined Wang in one of her characteristic rapid bows and then humorously grabbed his back, which elicited a laugh from the audience. Wang then treated the audience to only one encore, a toccata composed by Tilson Thomas, titled, “You Come Here Often?,” which starts out sounding like Gershwin but ends up sounding like Prokofiev. Wang used an iPad instead of a paper score and, not surprisingly, was able to “turn the pages” without missing a beat. She is truly a younger generation pianist.

After intermission, Tilson Thomas and the orchestra returned and delivered a fresh and moving performance of Sibelius’ second symphony, perhaps the most performed of his symphonies. Tilson Thomas did not overlook any detail, perhaps because he used a score, and expertly wove the sectional playing, which is characteristic of Sibelius, into one seamless fabric. The LSO gave the audience an emotionally thrilling performance that would have aroused the nationalistic passions of any Finns in the audience. The very appreciative audience was then treated to a very fast encore of the Brahms Hungarian Dance No. 1.