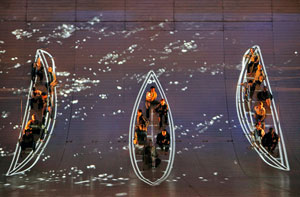 We need contemporary opera. The art form has to continue and evolve. That means opera houses have to challenge us with a “Moby-Dick” as much as they have to comfort us with another “La Bohème.” In that spirit, LA Opera brings us Jake Heggie and Gene Scheer’s “Moby-Dick,” a Dallas Opera commission that premiered in that city’s new opera house in 2010.

Will “Moby-Dick” stand the test of time, joining the ranks of the tried and true? Or will it fall into obscurity? Perhaps only time will tell. Certainly, the source material for this new opera, Herman Melville’s novel “Moby-Dick,” was not a commercial or critical success in the 19th-century. But today it’s considered one of the Great American Novels — though, it’s interesting to note, few have actually read it cover to cover.

On Nov. 7 at the Dorothy Chandler Pavilion, some audience members didn’t come back to their seats after intermission. But others gave “Moby-Dick” a standing ovation, like the Dallas crowd did at its premiere. Friends of mine who saw prior performances gave it less than favorable reviews. “I prefer the classics,” said one who saw its premiere in Dallas. “I hated it, the music was uninspiring,” said another who tends to like artwork that pushes the envelope.

That said, I was entertained. Composer Heggie and librettist Scheer did a remarkable job of condensing the massive novel and dramatizing all the requisite themes and conflicts. The novel can be quite poetic at times, and so can this opera. Some of the music was almost Wagnerian. However, Heggie has also said that Sondheim was an influence (and dedicated the score to him), so there are a few numbers that seem more fit for a musical (the crew’s song was a bit shallow, and Greenhorn and Queequeg’s duet was overly sentimental, while Pip’s singing about tough, rare and bloody whale meat seemed silly). James Conlon and the LA Opera orchestra played with their typical gusto, hitting all the right notes.

Jay Hunter Morris made a convincing, stubborn and vengeful Captain Ahab. It was ingenious of Scheer to borrow almost all of Ahab’s lines from Melville and ensure that the opera reflects the author’s poetry. Other standouts were Morgan Smith as Starbuck and Musa Ngqungwana as Queequeg.

I found the “Ishmael” narrator, here called Greenhorn, and Pip, Ahab’s cabin boy (and the only female role in the opera), to be less than engaging, sometimes bordering on irritating. The score and libretto just seemed a bit weaker for these characters at times. However, I can never quibble with the singing at LA Opera, which is consistently excellent. Joshua Guerrero, who played Greenhorn, was a 2014 Operalia winner, and Jacqueline Echols, who played Pip, is an alumna of the Domingo-Cafritz Young Artist Program at Washington National Opera.

The projections, lighting and scenic design were stunning, quite artistically conveying the epic nature of the story and the vastness of the setting. Some of the magical imagery included the smaller whaling boats projected on a sloped stage, down which sailors could be tossed into Davy Jones’ locker, and Pip swimming through waves in the air.

As the scene approached when Moby Dick would appear, I wondered excitedly what we would see. Spoiler alert… We saw the white whale’s eye for a few seconds. Despite a lost opportunity for intense drama, I somehow wasn’t disappointed. Pardon the comparison to Ridley Scott’s “Alien,” but this choice reminded me of horror films in which the creature remained shrouded in some mystery. Plus, even though Melville had factual inspiration for his novel, the story is so metaphorical that I looked into that eye as briefly as Ahab did and felt something important was revealed.