Review: Mozart’s ‘The Clemency of Titus’ at LA Opera 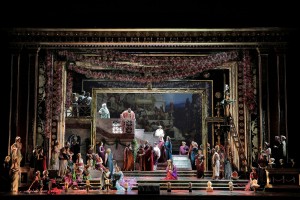 Though commissioned to celebrate the coronation of Leopold II in Prague in 1791, and based on Titus Flavius Vespasianus who became emperor of Rome in 79 A.D., Mozart’s “La Clemenza di Tito” speaks to our current state of affairs. The opera champions a merciful ruler who demonstrates love and forgiveness for a young patrician (and friend) who conspired to murder him. Like Philip Glass’ “Satyagraha,” mounted earlier this season, LA Opera’s “The Clemency of Titus” gives us an uplifting and inspiring antidote to our turbulent political times.

Given that its libretto is paired with the exquisite music of Mozart and that this opera is rarely performed, I recommend that you don’t miss the chance to see LA Opera’s first production of “The Clemency of Titus,” which opened March 2 at the Dorothy Chandler Pavilion and continues through March 24.

Mozart’s penultimate opera, “La Clemenza di Tito,” was written at the same time as “The Magic Flute” and completed three months before his death. While it enjoyed success after its 1791 premiere, it subsequently faded into obscurity. The North American premiere came 161 years later at the Berkshire Music Center in Tanglewood in 1952. More recently, it was performed at the Salzburg Festival (directed by Peter Sellars) and Glyndebourne summer festival, both in 2017.

This 2019 production marks LA Opera’s seventh Mozart opera and offers everything you could want from an evening at the opera, including gorgeous and lavish sets by Director Thaddeus Strassberger and costumes by Mattie Ullrich that dazzle the eyes and sweep you away to ancient Rome. Ornate gold frames surround the stage, framing the 19th-century Romantic-era paintings projected as backdrop as well as the action taking place before them. On one of her gowns, Vitellia flaunts a bright red 25-foot train. Lighting designer JAX Messenger and projection designer Greg Emetaz dramatically create the burning of Rome at the finale of the first act; and just as breathtaking is the city in ruins at the opening of the second act. This production is a work of art you won’t soon forget.

LA Opera’s casting helps make this 228-year-old opera even more relevant as it embraces the diversity that reflects our world. Titus is played by Russell Thomas, an African-American tenor Plácido Domingo calls “one of the premier tenors of our time.” (Thomas also sang the role at the Salzburg Festival.) Chinese soprano Guanqun Yu, an Operalia winner, plays Vitellia. And there’s a surprising gender bender in this opera because the two male roles written for castrato and soprano en travesti, Sesto (friend and betrayer of Titus) and Annio (friend of Sesto), are played by women. Mezzo-soprano Elizabeth DeShong proves that Sesto is one of three principal roles in this opera. Thomas, Yu and DeShong were spectacular and fully deserving of all the enthusiastic applause they received opening night.

And the music? James Conlon, a master of the Mozartean repertoire, guided the LA Opera Orchestra through such a brilliant performance that we were forced to ask: Why isn’t this opera performed more often?

While “The Clemency of Titus” has a political structure, it is more importantly a universal human story, complete with a love triangle and a murder plot. A generous dash of humor and a definite lightness belie its opera seria label. Take a break from the 24-hour news cycle, and lose yourself in LA Opera’s extravagant artistic spectacle.