Review: ‘Much Ado About Nothing’ at A Noise Within 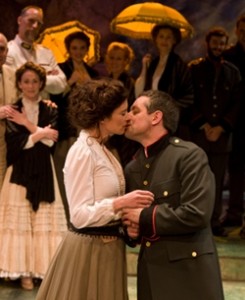 Catch "Much Ado About Nothing" at A Noise Within through May 21. / photo by Craig Schwartz

Shakespeare’s “Much Ado About Nothing” remains an oft-performed play more than 400 years after its premiere. In spite of its rampant, politically incorrect male chauvinism, the Bard’s witty romantic comedy is still pulling laughs from appreciative theater-goers.

Director Michael Murray’s production at A Noise Within in Glendale doesn’t gloss over the play’s misogynist elements, nor apologize for archaic inequalities between the sexes, in order to mollify a modern audience. Instead, the characters are allowed to be themselves, warts and all, within the historical context of the story.

The action of the play takes place at the estate of Leonato, governor of Messina, on the coast of Sicily. Kurt Boetcher’s voluptuous unit set evokes the sultry, Sicilian atmosphere that gives rise to the plot’s red-hot passions. Costume designer Soojin Lee updates the period, without modernizing – the women’s clothes are light and gauzy, the Governor wears an ice cream-white suit – and we are spared the usual discomfort of watching overheated aristocrats dance strenuously in the southern climate, draped in heavy Elizabethan brocades.

The story concerns two girls – Leonato’s daughter, Hero, and his orphaned niece, Beatrice – and their suitors, Claudio and Benedick. Brandon Hearnsberger and Lindsay Gould make their ANW debuts as the fall-in-love-at-first-sight Claudio and Hero. She is all virginal delight and he all mad passion, and their chemistry is very Othello, without the body count.

Also new to ANW is Torri Higginson as Beatrice. Tall and long-limbed, with a strong and flexible voice, Higginson layers a witty and sharp-tongued spinster over a core of yearning and heat. This is a portrayal worth seeing. Opposite her as a vulnerable and appealing Benedick, JD Cullum’s performance balances on the razor’s edge of restraint and abandon. Amid wonderful comic turns by ANW regulars, his “Love me? Why?” is the biggest laugh in the show.