Review: ‘My Sister’ at the Odyssey Theatre 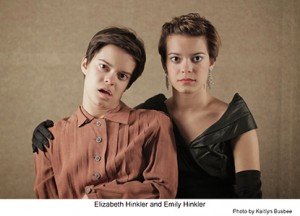 Elizabeth Hinkler and Emily Hinkler star in “My Sister” at the Odyssey Theatre. / Photo by Kaitlyn Busbee

A few years back, Janet Schlapkohl, an adjunct professor of drama at the University of Iowa, was intrigued by an unusual pair of students in her theater class: elfin identical twin sisters Emily and Elizabeth Hinkler. So, when opportunity knocks… write a play! That seems to have been the causa prima that ultimately evolved into “My Sister,” a poignant drama now playing at the Odyssey Theatre.

On one level, the story follows the ups and downs of a pair of artistically minded twins as they try to make it in 1930s Berlin. Magda (Emily) is a cabaret performer, chanteuse and comedienne; her sister Matilde (Elizabeth) is a writer, providing material for her sister. Besides occupation, there is one key difference between the twins: Matilde is housebound, suffering from crippling cerebral palsy. During the Nazi rise to power, preoccupation with forming a “Master Race” of Aryans meant that certain groups of people who are different, like Jews, homosexuals, gypsies and the disabled, were rounded up for deportation and, ultimately, extermination. It is under this cloud of seeming inevitability that the story proceeds.

For some time, Schlapkohl had been researching the German interwar period. Her grandmother was a German immigrant, her mother an identical twin, so when the talented Hinkler sisters appeared, she knew that she had found the hook of an idea for a play. The sisters performed a shorter version of “My Sister” as a senior project, and it was subsequently fleshed out in workshops and the Hollywood Fringe Festival. This is an expanded version of those earlier productions.

Dual directors Ron Sossi and Paul David Story have dealt effectively with the idea of bifurcation, beginning with the set. On the left side is a cabaret (complete with live piano player Barbara Rottman); on the right the dingy one-room apartment of the sisters. The action moves back and forth between the two locations in a pleasing rhythm with interludes of (original) songs and corny jokes at the cabaret and an exploration of the sisters’ hopes and dreams at home. Throughout, we are aware of the National Socialists in the audience at the cabaret and marching in the streets outside. Germany is changing rapidly, but only Matilde seems to grasp the danger lurking behind the Nazi bravado and sloganeering.

Elizabeth Hinkler as the afflicted Matilde really gives the star performance in this play. She is remarkable in her representation of the ravages of cerebral palsy, contorted in both her body and her speech. But her mind is playful and sharp, and she is believable as a shut-in writer, chasing her ambitions and participating in life just as much as her sister. Her insights about what is really happening politically in Germany provide an unsettling undertone to the girlish optimism and normal strivings of two 20-something young women trying to make it in showbiz in the big city.

The only real problem I had was at the end. The play is bookended — prologue and epilogue — with a bent old woman telling the story of what happened many years ago. The epilogue is a quick summary of what transpired after the last time we saw the two sisters together. I actually had to ask the actors which sister survived. I was confused because the wrap up was so quickly delivered.

Overall, however, this is an entertaining and thoughtful way to explore a period not too far in the past where artistic expression and individuality were stifled and stamped out in the name of Nationalism. The playwright avoids using the term Nazi, instead using National Socialist, to help avoid the immediate visceral reactions most people have to the former word. Instead, they are presented as an annoying political faction that artists are putting up with until they go away. The striving for racial purity through the weeding out of “defectives” is a little-known sidebar to the many persecutions of the mid-20th century, and “My Sister” is a fascinating and emotionally gripping expression of that tale.