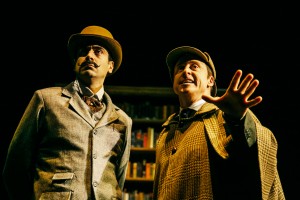 Ramiz Monsef and Alan Tudyk in the world premiere of "Mysterious Circumstances" at the Geffen Playhouse / Photo credit: Jeff Lorch

David Grann, a journalist who writes nonfiction that reads like fiction, has written compelling books about a British explorer who disappeared in the Amazon looking for a lost ancient city and the Osage Indian murders that led to the creation of the FBI. In December 2004, he published an article in The New Yorker called “Mysterious Circumstances: The Strange Death of a Sherlock Holmes Fanatic.” Playwright Michael Mitnick was inspired by Grann’s story and created Mysterious Circumstances.

The world premiere of his play, onstage at the Geffen Playhouse through July 21, is a production filled with intrigue and illusion. Entertaining, literary, brilliantly acted and masterfully produced, Mysterious Circumstances is bound to become a classic.

Mysterious Circumstances is about Richard Lancelyn Green, a scholar and fanatic of Sir Arthur Conan Doyle and Sherlock Holmes who owned the world’s largest collection of Sherlockiana, edited a book of letters written by real people to the fictional detective (Letters to Sherlock Holmes) and died in 2004 under “mysterious circumstances.” His death remains an unsolved case — perhaps the only suitable end for a Sherlock fan.

Geffen Playhouse Artistic Director Matt Shakman and Mitnick have created a fantastic world of illusion onstage at the Geffen’s Gil Cates Theater, with set design (Brett Banakis, co-designer of Broadway’s Harry Potter and the Cursed Child), lighting and projection collaborating with illusions designed by magician Francis Menotti and illusionist (and crossword puzzle constructor) David Kwong. The shelves and shelves (and piles) of books themselves are phenomenal enough, but the sets change in ingenious ways, and the theatrical magic is literally magical at times. For one amazing illusion, actor Austin Durant (Conan Doyle) stands within a huge frame and becomes an oil painting.

Adding to the sense of illusion, all of the actors take on multiple roles. The talented Alan Tudyk (Spamalot and Death at a Funeral) plays both Green and Holmes. Holmes, with John Watson, investigates the death of Green. The line between real person and fictional character is blurred, as it was for Green who seemed to have no close personal relationships, only a fanatical love of all things Doyle and Holmes — a love that drove him to his own demise.

The facts you learn in this play, about both Green and Doyle, are as fascinating as any fiction you’ll read. For all the death and mystery, there is a lot of great humor in this too.

Simply put, this is some of the best theater you will find anywhere.The story and the production design will carry you away to a world of imagination and mystery that you won’t want to leave. And because you’ll be inspired to read Grann’s article and Sherlock Holmes stories after seeing this play, perhaps you won’t have to.