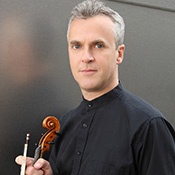 The Estonian conductor (and American citizen since 1980) Neeme Järvi led the LA Phil in a program of works by Brahms (Tragic Overture, Op. 81 and Symphony No. 4 in E minor, Op. 98) and Joseph Suk (Fantasie for Violin and Orchestra, Op. 24) in a Saturday matinee concert on April 18.

The program started with Brahms’ Tragic Overture, Op. 81. The LA Phil was scheduled to perform the Tragic Overture last year under its music director, Gustavo Dudamel, but a large-scale percussion work that was also on the program demanded so many percussion instruments and so much time to set them up that the overture was scrapped.

On Saturday, the 78-year-old Järvi conducted a brisk 12-minute version that was faster than any recorded version and that missed the mark of conveying the emotional seriousness of the piece. There were also several flubbed notes by the horns, which may have resulted from being forced to play so quickly.

The first half concluded with a performance of Suk’s Bohemian and Czech-inspired Fantasie for Violin and Orchestra with LA Phil Concertmaster Martin Chalifour as soloist. It’s always a pleasure to hear a relatively obscure work, especially one such as the Fantasie that is so rich in color and musical content. Chalifour’s playing showed why he has the chops to be a soloist. His playing was at the same time both crisp and warm. It was a treat to see our concertmaster out in front.

The second half of the concert was devoted to the Brahms Symphony No. 4. Järvi  picked up where he left off with the Tragic Overture, playing the first two movements at breakneck speed. In fact, the first movement was played so fast that at times the instruments seemed to blur together and the contrapuntal effects that distinguish Brahms’ final symphonic composition were lost. It was definitely a test of the musicians’ endurance.

The second movement was also played too fast, sacrificing its solemnness. Compared to the first two movements, the tempo of the third movement did not seem too fast; but then again, it is supposed to be played up-tempo. In the fourth movement, Järvi returned to a more normal tempo, and it was here that one glimpsed what could have been in the first two movements and in the Tragic Overture. It was in the final movement that Järvi almost made us forget the rushed first two movements. And by the time the two concluding chords were played, we felt the full force of Brahms’ final symphony.

This concert will repeat on Sunday, April 19, at 2 p.m. For information on upcoming concerts, visit www.laphil.com.