Review: ‘Next to Normal’ at the Pico Playhouse 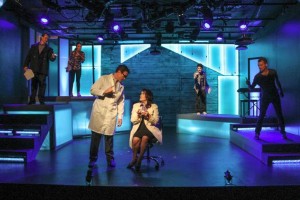 "Next to Normal" is onstage at the Pico Playhouse through Sept. 25. Photo by John Dlugolecki

We all have a myriad of entertainment options, so who could blame you for not immediately hastening to see a show dealing with mental illness, drug abuse, suicide and dysfunction? Sounds depressing, right? But you’d be making a mistake to dismiss Next to Normal on that basis. This musical has compelling characters, catchy songs and an emotional depth that make it a must-see during its latest L.A. run at the Pico Playhouse.

Next to Normal, with book and lyrics by Brian Yorkey and music by Tom Kitt, began life as a 10-minute musical short about electroconvulsive therapy after Yorkey saw a piece about it on Dateline NBC. In Yorkey’s view, it is “exponentially harder to write an original musical. Musicals that go wrong can be ridiculous because it’s a ridiculous art form. People bursting into song can be ridiculous. But musicals that go right can be sublime.” Critics apparently agreed, nominating it for 11 Tony awards in 2009. It won three, and the play went on to win a Pulitzer Prize for drama in 2010.

The play opens with a cheery view of a typical suburban family getting ready to begin the day. The four-piece live band launches into an upbeat number sung in turns by mom, dad, teen son and daughter. It doesn’t take long, however, for a couple of big reveals to show that not all is right in Mayberry. Mother Diana (Michelle Lane) suffers a debilitating lapse after manically slathering a slew of sandwiches, and (spoiler alert) the teen son is soon revealed to be a hallucination inside mom’s mind — the memory of a son who died in infancy 16 years before.

Rather than simply following Diana’s descent into the depths of bipolar delusion and confusion, the play explores varying aspects of the tense family dynamic. We see her husband Dan (Nick Sarando) struggle with depression as his family falls apart, as well as the budding romance between his prickly daughter Natalie (Isa Briones) and her high school friend Henry (Blaine Miller). We get to understand what’s at stake for each of these family members, as well as the spirit of her son, Gabe (Harrison Meloeny), who is elated to be reincarnated (in Diana’s mind), and resists attempts of the others to banish his memory.

As song after song unfolds, it is clear that this is a work of musical theater conceived and executed at the highest level. While Next to Normal is generally referred to as a “rock musical,” I would say the songs are not that at all, but conceived in the best traditions of Broadway musical theater. The songs are emotive ballads or light, pop-infused, up-tempo numbers — but they are pleasing and memorable. The orchestra remains hidden behind the stage and provides unobtrusive accompaniment to the singers with percussion, violin, bass and guitar.

Any musical is heavily reliant on its singers, and Director Thomas James O’Leary has cast some fine ones. While the key role of Diana is handled well by Lane, the two most outstanding singers are Meloeny as the erstwhile son and especially Briones as the troubled daughter. Considering she is only entering her senior year in high school, Briones shows a great maturity in portraying the impatient peevishness of disaffected youth — and her voice is just terrific. I hope we see more of her.

Considering there are more than 40 musical numbers, the skillful pacing of the songs helps keep the story moving along as our attentions are pulled here and there with each new turn of events. What is perhaps most gratifying is how much the compact space in the Pico Playhouse contributes to the audience involvement with the characters and the music. After earlier runs in a Broadway theater of 2,000 seats and a later run at the spacious Ahmanson, it is really great to be so close to the actors. Even though the actors are miked, it almost seems unnecessary in such an intimate space.

The culmination of the play comes when Diana’s doctor suggests electroconvulsive therapy after other forms of treatment fail. To those not familiar with the subject, this may seem like a throwback to a more primitive way of treating mental illness, but as the play makes clear, it is still a useful and current therapy. While it may seem a bit strange to address these serious and complex issues through popular song, I can’t argue with the results. Next to Normal sheds light on a serious social problem without being preachy and with a considerable wallop of emotional impact. Even though the problems illuminated are not neatly solved, you’ll leave the theater with a lighter heart than when you went in.