Review: Nick Dear’s ‘Frankenstein’ at A Noise Within 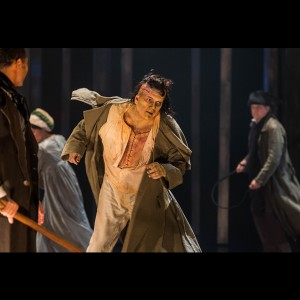 It’s clear who the real monster is in Nick Dear’s “Frankenstein.” Hint: It’s not the guy stitched together with dead body parts. Dear’s play, which premiered at London’s Royal National Theatre in 2011, tells Mary Shelley’s story from the perspective of Victor Frankenstein’s creature. It gets its California premiere at A Noise Within in Pasadena through Sept. 8.

Having seen the video of the 2011 production at the Huntington Library’s Frankenstein conference last year, I was very excited to see this new one from A Noise Within, which specializes in quality classics. Directed by Academy Award winner Danny Boyle and starring Benedict Cumberbatch and Jonny Lee Miller (who took turns playing Victor and the creature), the National Theatre production became an international sensation broadcast in theaters. My expectations were high for A Noise Within’s production — and they were met.

Dear’s script takes us into scenes that never appear in Shelley’s novel, but he captures the essence of the characters, the moral conflict and the emotion at the heart of the book. It’s a wonderful companion to the phenomenal 200-year-old classic.

The play opens with the birth of the creature, played by Michael Manuel. An electric jolt — and a hulking man breaks free from the lab table. As he learns to use his body, the grueling task draws our sympathy. Victor Frankenstein enters to the sight of his creation living, breathing and moving. In terror, he throws his coat at him and flees.

Abandoned by his creator, Frankenstein’s creature is the ultimate manifestation of the other. He’s so other that he never even gets a name. He sets off into the forest, and we see him wonder at the rain and giggle with joy upon tasting a raspberry. He’s already obviously human, and he becomes more and more so as the play goes on.

With the help of a blind man, he learns to talk and read. The creature comes to identify with Milton’s “Paradise Lost,” the story of Adam and Eve and Satan, and seems to reach an intellectual level on par with his creator by the time his one-year education with the blind man has ended. By reading Victor’s journal, which he found in the coat pocket, the creature knows who his “father” is and more about who he is. And he sets out to find Victor.

Manuel is a phenomenal Frankenstein, one to inspire future productions. Film-worthy makeup and prosthetics transform him into a creature worthy of Shelley’s book. And Manuel’s subtle transformation of the creature throughout the play, verbally, intellectually and physically, is a marvel to witness. It feels completely natural despite the condensed timeframe of the story: two hours (with no intermission). (Director Michael Michetti and Assistant Director Rhonda Kohl worked with Manuel in an intensive one-week rehearsal on movement alone.)

Initially, we see a gulf between Victor and the creature. Victor seems incapable of love, while the creature yearns for love and companionship. Victor is selfish and completely closed to the idea of caring for his creation, while the creature considers the meaning of his own existence and is traumatized by his ugliness and the hatred of people. The two dream sequences intensify these differences.

Then the gulf begins to shrink. The creature gradually becomes more human and then, of course, turns into a cold-blooded killer bent on revenge against Victor. The last straw is when Victor agrees to make a companion for the creature and then destroys her. In the end, Elizabeth offers her friendship, but the creature is as consumed with fury as Victor is, and so there is no turning back. Creator and created set out on a chase to the ends of the Earth to destroy each other.

“Frankenstein” is one of the most complex productions the classic theater company has attempted. Michetti made thoughtful choices in his direction, producing a gothic horror tale that is at once chilling and heart-rending. While some versions of Shelley’s story can get gory (like Mark Grey’s 2019 opera adaptation, for instance) Michetti steers away from that — with just a touch of bloodiness in a critical scene. The set design, including four mirrored moveable panels and wood beams suspended from the ceiling, was perfect in its simplicity.

“Frankenstein” is one of the best stories ever written, and A Noise Within’s production is one of the most electrifying adaptations you’ll see. Don’t miss it!