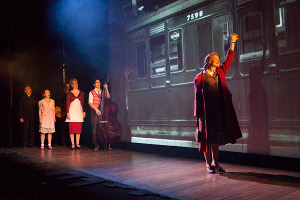 The ingenious use of technical effects make for an all-encompassing Disneyland-esque ride, otherwise known as Noel Coward’s “Brief Encounter,” currently at the Wallis Annenberg Center for the Performing Arts. Like a live organ accompanying a silent black-and-white film punctuates the suspense of a film noir melodrama, director/adaptor Emma Rice uses specific sound effects and video visuals to heighten the drama of the unfolding live action on stage.

Pre-curtain a troupe of 1938 theater ushers casually stroll through the audience entertaining with their harmonizing, soft-shoe and spoon-playing. Then the house lights dim and credits of a black-and-white film are projected on the movie screen center stage. A couple of actors sitting in the audience start talking. Others shush them. The actor in the black-and-white film calls for the actress in the audience, Laura, to come home. Laura is now talking to her fellow movie watcher Alec and talking to the man on the screen who turns out to be her husband Fred. More of the others keep shushing them. When Laura finally agrees to go home to Fred, she walks through the screen, and, voila, she’s now Fred’s wife in the film. And that’s just the opening. Wow!

The primary “Brief Encounter” centers around the chance meeting and resulting consequences of a married mother of two, Laura (Hannah Yelland), and a good Samaritan doctor, also married, Alec (Jim Sturgeon). The main setting — a coffee shop at a train station — receives full vibrant life from the supporting ensemble that plays multiple roles.

As Myrtle, the owner of the shop, Annette McLaughlin steals the stage with her exaggerated hip-swaying walk and comic delivery of many lines. As Albert, the train conductor who’s smitten with Myrtle, Joe Alessi successfully flirts and seduces until Myrtle and Albert engage in a hot and hysterical coital dance. Alessi also ably plays Laura’s husband Fred as a loving, appreciative, but not the most observant spouse. Or maybe he’s just wisely giving Laura the freedom she needs for her to always return to him. This is 1938, after all!

Damon Daunno hits all the right notes, both as Stanley the sweets vendor sweet-talking winsome waitress Beryl (winningly played by Dorothy Atkinson), and when singing the background mood-inducing songs (by Stu Barker) behind Laura and Alec’s scenes.  Daunno and Atkinson’s vocal and stand-up bass duet on “No Good to Love” plucked all the right heartstrings, romantic and puppy-dog cute. Atkinson and McLaughlin delight in all their various other roles.

Also, adding their musical talents, theater ushers David Brown and James Gow doubled as adept puppeteers. Kudos for the novel use of puppets, both children and moppy dogs (designed and made by Lyndie Wright, with puppetry training by Sarah Wright).

Via tightly synchronized, choreographed moves, the entirety of the cast very credibly telegraph the rumblings of an approaching train, the heavy whoosh of a sudden wind, the calmness and the roughness of the ocean waves. Too funny!

Credit should also be given to Neil Murray for the multi-functional set design, complemented by the projection and film designs of Jon Driscoll and Gemma Carrington. Their “From Here to Eternity”-like beach scenes and roaring trains passing through the station stun!

Rice directs this 90-minute entertainment with the almost-continuous flash of Cirque du Soleil awesomeness, save the quiet, chemistry-absent scenes between Laura and Alec. Both Laura and Alec come off so restrictive, so unexciting, that it’s easy to focus on the more interesting secondary characters’ stage business (though subtle) in the background. It probably would take the magnetism of Bogey and Bacall to pull back focus from the hardworking auxiliary characters. How generous of Yelland and Sturgeon to allow the others to frequently upstage their scenes.