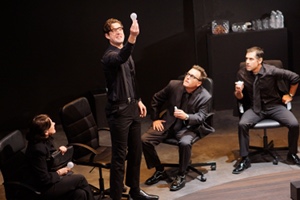 The NoHo Arts Center Ensemble scores another hit with the world premiere of “The Light Bulb.” The talented cast gives full life to the smart, witty and cohesive dialogue written by Joshua Ravetch (previously seen last year at the NoHo Arts with his other hit and world premiere “One November Yankee”). Artistic Director James J. Mellon directs this 90-minute one-act with a firm hand, keeping the potent barbs delivered in machine-gun precision while making full use of the stage and “extra” spaces in the balconies.

Theo, an unassuming receptionist at a large law firm, discovers a light bulb that will never burn out. The task to market Theo’s new invention falls on the shoulders of MadCap’s beleaguered group of marketing execs. Their fear of being fired by their new boss completely panics them into a drought of ideas. The bad slogans and brilliant one-liners fly fast and furiously from this “team” of advertising masterminds as they attempt to hurdle their writers’ block and create an ad campaign to impress their soon-to-arrive new boss.

Robert Arbogast deftly plays both the slick on-camera facade and the thinking off-camera side of Clay Strong, the news reporter assigned to cover MadCap’s light bulb press conference at Hoover Dam. A surprise turn of events prompts Strong to reflect on his earlier stint as war correspondent. He still has recurring doubts about standing behind the microphone and not physically intervening to stop a soldier from being killed. Did being press give him the moral right not to participate?

Karesa McElheny as Candice, the new boss from hell, has the most fun — diva-ing, bossing everyone around and condescending to all. As the teenage intern who actually came up with the winning slogan, Matthew Shane brings the time to the very present as one so young not to know any pop reference older than Snowden. He doesn’t know whom his drink of 7-Up and grenadine is named for.

All get their individual moments to break down the fourth wall. Most effective in these heart-to-audience moments are Roseen and Goodman. And all the actors get plenty of great material to work with from Ravetch. For instance, many variations of the “How many ***** does it take to screw in a light bulb?” joke bring a variety of comic results.

Go in thinking you’re in for a fun performance of farce… and you’ll leave the theater questioning your own moral compass, considering what’s really important to you and what you’d do to achieve it. In response to being accused of being insensitive, Candice replies, “I’m not insensitive. I’m in sales.”