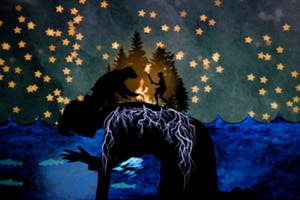 REDCAT’s annual New Original Works (NOW) Festival draws to a close tonight (Aug. 7), but the three live performances included in this week’s show raise more than enough questions to fuel another year of artistic investigation. And as Thursday’s show sold out long before show time, get your tickets NOW and read on after.

Alexandro Segade’s Replicant VS Separatist, a play framed as a budget movie shoot complete with directorial “cuts” and actors who switch between roles, couldn’t be more timely, premiering hot on the heels of the decision to overturn California’s ban on gay marriage. The movie inside the play depicts a dystopian LA where marriage has become a state-mandated instrument of government control over gay relationships. The clones who comply: Replicants (Reps). The boy-band renegades who love outside the law and fight to establish a state beyond the new governator’s reach: Separatists (Seps).

Segade’s choice to build a story full of wonderfully classic sci-fi illusions – like hovercars and teleportation – within a deliberately anti-illusionistic frame at first heightens the humor by playing up the falseness. But then his droning directorial comments lose their deadpan comedy and, in combination with ever-shortening, increasingly perfunctory scenes, deaden the energy. Maybe we need these breaks to keep us from getting so swept up in the onstage antics that we forget to consider their broader implications. But at the end, I wonder if we’ve been distanced so successfully that instead of dispassionately considering the issues raised, we move on too easily to the next new work.

Hana van der Kolk mouths something from behind a microphone. She releases a vowel sound, then others in steady rhythm, and when she adds consonants the chorus from the 1987 classic “Lost in Emotion” gradually emerges in a robust chant. Watching Once More, Again, One, we whisper and chuckle softly when we get it, and sharing the joke connects us to her and each other through the darkness. Later on, van der Kolk transfers her weight side to side with an easy bounce, punctuating some drops with a spoken “yes.” The bounces morph to jazzy jogs, then hunched boxing footwork, then ecstatic Richard Simmons-style reaches, and she says “yes” to each with complete investment and unequivocal assent.

I struggle to engage through some of the work’s slower progressions and stillnesses, but the spaces make Once More feel like a relaxed conversation and invite us to take part. Van der Kolk makes a formal and completely unthreatening invitation when she holds up a sign that reads “I need a volunteer.” Although the physical tasks they complete don’t seem quite worth the trouble, the exchanges we witness while she whispers her plans to each volunteer are thrillingly real and beautifully human. They smile shyly, giggle and shake out shoulders nervously, register polite unwillingness with side-to-side tilts of the head, and as we imagine ourselves doing these things we feel welcomed by van der Kolk too.

Oh, if only all evenings could end as magically as this show does. A woman’s rounded silhouette wanders through an ever-blossoming, ever-changing world in Miwa Matreyek’s Myth and Infrastructure. Interacting with her animations from behind a screen, Matreyek casts a shadow that steps lightly and fingers tenderly, exploring blinking cityscapes like a gentle King Kong, or forming an island paradise with her softly sloping back.

The images that result suggest creation stories, as lands materialize with a breath or a tap, or apocalypses, as tiny planes crash down around her head and buildings collapse at her feet. Her powers to create and transform intrigue as she encounters other beings with agency – a bear that lumbers onto her back, fish that rush and swirl about her, a tiny person who climbs into her mouth and down her throat. Toward the end I find myself hoping for more variation in Matreyek’s physical interactions with these creatures and their world, but the work is mesmerizing throughout and exciting in the rich possibilities it suggests for future incarnations.

Segade, van der Kolk and Matreyek present these works in the final performance of the NOW Festival tonight, Aug. 7, at 8:30 p.m.