Review of ‘Keith Moon: The Real Me’ 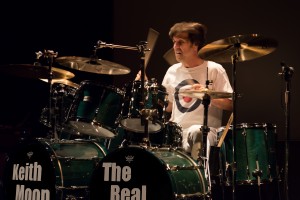 On April 15, Mick Berry ended the one-month run at the Hudson Theatre in Hollywood of his one-man show, “Keith Moon: The Real Me.” The show resumes for three nights only at the Dragon Theatre in Redwood City on April 20.

Keith Moon, like so many rock stars, was a light that burned brightly and briefly, though not as briefly as some (e.g., Hendrix, Joplin, Morrison). But Berry, with the help of Moon’s daughter and son-in-law, Roger Daltrey and Pete Townshend, depicts not only the great drummer for The Who, but the tortured, tragic person that Moon was.

The show, written and performed by Berry, with some expert help from Director Nancy Carlin, Music Director Frank Simes and the musicians who covered the songs in the recordings Berry played to, depicts Moon’s struggles with alcohol and drug addiction, his lack of confidence as a drummer (At one point he says “I am the best Keith Moon-style drummer”) and his failure in personal relationships. All of this occurs in the context of some of the great Who songs written by Townshend. Berry picked songs that fit well with the narrative, such as “The Real Me,” “Who Are You” (to which Berry as Moon screams while playing the song, “Stop asking that question!”), “I Can’t Explain” and, of course, “My Generation,” with its famous line, “I hope I die before I get old.”

In telling Moon’s story, Berry moves seamlessly between a monologue, which often is more like a dialogue with the audience, and his outstanding drumming to his band’s recordings (without drums) of selected Who songs. Sound management was a balancing act to level Mick’s vocals, the toms, the snare, the cymbals and the music of The Who, according to Music Producer Eugene Strawhun. And since live drums and cymbals in such an intimate setting would have blasted the audience’s eardrums, the drums used “silent” mesh heads with digital triggers to reproduce live drumming sound, which enabled control of sound and volume, and dampening tape was added to the cymbals.

Berry has all the drum chops, which is not an easy feat because as he (Moon) notes, he doesn’t just play beats. In fact, there was one humorous point in the show where Berry (as Moon) went through five or six Rolling Stones songs (Satisfaction, Brown Sugar, Jumpin’ Jack Flash…) playing the exact same beat and drum part. It was a comment on the difference between his style of drumming and that of Stones drummer Charlie Watts. Of course, anyone familiar with Moon’s playing knows he was a wild man behind the drums. It turns out that he was a wild man in his life too, living the equivalent of one full, but sad life in only 31 years. Berry convincingly conveys that the only time Moon seemed free of his demons was when he was playing. Other than that, he was a wreck.

Not only does Berry play the drums like Moon, he also talks during some of the songs, trying to convey what Moon might have felt while playing the song. In a couple of instances, Berry actually illustrates each drum part (e.g., fill before the second verse) in a song for the audience. When he is talking to the audience, either pictures or lyrics are projected on the screen behind him. But when he is playing, the audience gets an overhead view of Berry. Considering that he really played like Moon, it’s amazing that Berry rarely seemed out of breath, and it’s hard to imagine that he had just performed the show the night before, much less three days a week for almost a month.

In “Keith Moon: The Real Me,” Berry becomes both Keith Moons: the rock-star drummer and the tragic figure. Berry’s performance — as a writer, actor and drummer — is a tour de force. If you’re a fan of The Who and of Keith Moon and you live anywhere near Redwood City, this is a not-to-be-missed show!

Tickets and information at: www.KeithMoonTheRealMe.com.