Review: ‘Off the King’s Road’ at the Odyssey Theatre 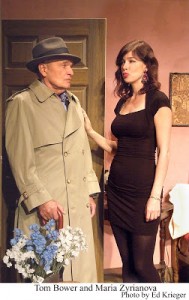 This is Neil Koenigsberg’s first play — not unusual in itself, but it is for a man in his 70s. As a former principal in the PR megafirm PMK, he has a lot of back story, I would imagine. Even though I don’t know Koenigsberg, I was struck by a feeling of watching some form of autobiography during the performance of Off the King’s Road. Indeed, sometimes, writing can be a catharsis — a way to give form to thoughts and feelings that have been bouncing around inside one’s head. Luckily for audiences, Koenigsberg’s inner space, while dark, is also filled with humor, wit and individuality. The West Coast premiere of Off the King’s Road runs through Aug. 2 at the Odyssey Theatre.

Koenigsberg’s touchstone in writing Off the King’s Road was obviously Ingmar Bergman, the late great Swedish film director. In fact, Bergman’s 1957 opus Wild Strawberries is mentioned overtly in the script. In the movie, as well as this play, an old widower on a trip abroad recalls memories that have been instrumental in defining his identity. Through the people he meets on his trip, he is able to revisit parts of his life that, for better or worse, gave it meaning.

But the play departs from the introspective and generally depressing tone of the film with a dose of comedy and sparkle that comes from its setting in a London hotel with the requisite colorful guests. The gay hotel manager, played by Michael Uribes, is properly reserved and British, but manages to pull a good amount of humor from the role as well. Mixing in a bit of Fawlty Towers or perhaps The Grand Budapest Hotel was the right choice to leaven the heaviness of the play’s themes of loss, aging and loneliness.

The play focuses on the elderly American visitor Matt Browne, played by veteran stage actor Tom Bower. Browne has recently lost his lifelong companion and wife, has retired from his career and has come to London to get back in touch with memories of happier times. Even though we are entertained by his encounters with the hotel manager, a Croatian prostitute and a curious cat lady, we eventually come to sense (alongside discussions with his psychotherapist) that these people are in some way metaphors or stand-ins for the personal memories he is attempting to come to terms with. These include not only the now-absent people from his past, but also thoughts of his younger, more sexually virile self.

The play is directed by Amy Madigan, best known for numerous roles as an actress on stage, TV and film. Koenigsberg is both a longtime friend as well as her former personal manager, so the bond between the two is close. Madigan has pulled together a good group of below-the-line talent to make this a very professional-looking production. The set design by Joel Daavid features a split stage with one half alternating between bedroom and hotel lobby by means of a revolving box, a device that works very well indeed.

Together, Koenigsberg and Madigan succeed in walking the fine line between a serious and a comic play. The first half is a bit slow as it installs all the pieces needed for the drama, but the second half is fully engaging as all the moving pieces are set into motion. Particularly engaging is a dream sequence where Matt lies on his bed while video and swirling lights give us a glimpse of the maelstrom that lies within his subconscious. The concluding scene where Matt is led off into the dark by his new female friend (death?) may be a page taken right out of Bergman, but having been properly set up, the denouement feels natural and not just imitative. Off the King’s Road is a worthy first work, and I hope to see more from Mr. Koenigsberg.