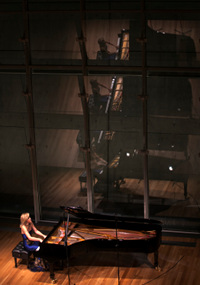 On Jan. 23 and 24, the 2001 co-Gold Medal winner of the Van Cliburn International Piano Competition, Olga Kern, presented two sold-out recitals performing Carnaval, Op. 9 by Schumann; the Sonata No. 2 in B-flat Minor, Op. 35 by Chopin; and a selection of Études-Tableaus and Preludes by Rachmaninoff. It is fitting that a winner of the Cliburn Competition, which is held every four years in Forth Worth, inaugurated the new auditorium in the aptly named Renzo Piano Pavilion at the Kimbell Art Museum.

After entering the Piano Pavilion, across the courtyard from the Kimbell, one descends a long wooden staircase to the auditorium, which is appropriately situated underground, eliminating any noise from the streets or skies.

The auditorium itself is built for superb sound. First, it is a very intimate setting with only 298 seats and not a bad one in the house. And, except for the seats and carpet runners down the two aisles, everything is made of glass, concrete or wood. Behind the stage are two layers of glass. The first layer consists of levered windows that can be opened to reflect the sound to the audience. They also visually reflect the artist, giving the audience a view of the artist from the other side of the stage — and in this concert, a view from above the keyboard. Behind the glass is a concrete wall. On the sides are reflective wood panels on concrete. The only real color is the bright red of the Italian-designed seats. The stage is very shallow, which means that the artist is very close to the audience. All of this makes for a very acoustically sensitive venue, and one in which every note of the piano, no matter how quietly played, could be heard with clarity until the sustain pedal was let up.

On Friday night, Kern showed not only why she was awarded a gold medal in the Cliburn Competition, but also how she has continued her development as a great pianist. Kern performed on a Steinway piano that she herself had helped select, and whose sound was deep and resonant in the lower registers and chime-like in the higher registers. But because the piano was new and not broken in, it had a harsh sound, which was exacerbated by the bright acoustics in the auditorium. No matter. Kern adapted, probably helped by having performed the program the night before. Once the piano and hall are broken in, the sound should evolve into something exceptional indeed.

It was clear that it was a special evening for Kern, even before she told the audience she felt a strong connection to Fort Worth. And she did not disappoint. She began the program with the Schumann, which is subtitled Scènes mignonnes sur quatre notes (Little Scenes on Four Notes) and is meant to represent masked revelers at a carnival. From the very first forte chord, Kern took the audience on a lyrical ride through Schumann’s 20 sketches reflecting the composer’s emotional attachment to the various characters, including his fiancé at the time, Ernestine von Fricken, and his ultimate wife Clara, as well as himself.

Kern closed out the first half with a performance of the Chopin second piano sonata, sometimes called the “Funeral March,” named after the third movement, Marche funèbre. She made the transition from the revelry and sentimentality of the Schumann to the gravity of the Chopin seamlessly. The combination of Kern’s playing, the piano and the hall’s acoustics gave this dramatic sonata a bigger sound than it already has.

But Kern upped the ante and saved her best for last with a series of selections by her countryman Sergei Rachmaninoff, including three of the Études-Tableaus and nine of the Preludes from Op. 23 and Op. 32. It was with the Rachmaninoff that she really showed her mettle and her romantic training.

Although the audience’s response was not particularly ebullient after the Schumann or Chopin, they immediately rose to their feet at the conclusion of the second half. Kern showed her appreciation, and her love for performing, by playing three scintillating encores, the Barcarolle by Rachmaninoff; the Étincelles (Sparks), Op. 36, No. 6 by Moritz Moszkowski; and the Étude No. 5 by French pianist and composer Charles-Valentin Alkan.

By providing a new architecturally and acoustically aesthetic venue for the Cliburn, the Renzo Piano Pavilion auditorium is an important contribution to the classical music scene. Even when the piano competition is not in full swing, the Cliburn concert series continues to bring in stellar performers. And the combination of world-class art and world-class music makes the Kimbell a prime cultural destination.

For information about the Cliburn and upcoming concerts, visit www.Cliburn.org.