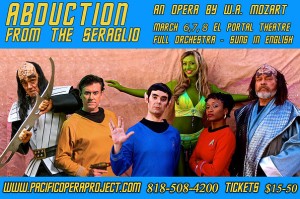 Its star date has already passed, but it’s worth mentioning that several thousand Angelenos were greatly entertained over the weekend by a hilarious mashup of Mozart and Star Trek at North Hollywood’s historic El Portal Theater. Pacific Opera Project’s Abduction from the Seraglio has shown once again that, with a dash of cleverness and a heaping helping of cheekiness, it’s possible to rekindle the relevance of centuries-old operas for new audiences.

Actually, the choice of Star Trek to frame the reimagining of Abduction from the Seraglio is one that Mozart himself would no doubt have approved. In 1782, the year of the opera’s debut, there were few places more exotic, alien and curiosity-inspiring than the harems inside the royal palaces of the fading Ottoman Empire. Likewise, the strange new worlds, bizarre aliens and romantic subplots stemming from the fevered imagination of Star Trek’s creator Gene Roddenberry have kept audiences rapt for generations. Artistic Director Josh Shaw integrated the two concepts by creating an entirely new English language libretto, which gave the latitude necessary for the plethora of pop culture references and interplanetary humor.

Trekkie purists were happy to see that all the principal roles were based on the characters from the original 1960s series; and the imitations of these characters provided a good measure of physical comedy. Best was Bryan Cheney as Belmonte/Captain Kirk: his halting speech and macho posturing reminded us how mannered and eccentric William Shatner’s original portrayal was. This was also true, but to a lesser extent, with Robert Norman as Pedrillo/Spock and Shawnette Sulker as Costanza/Uhuru.

For fans of the TV series, there were plenty of favorite bits and characters to amuse: the Klingon warrior chorus did a wonderful Rockette-style chorus line, miscreants were repeatedly “vaporized” by phaser guns, and there was even an appearance of the fearsome Gorn — a lizard-like humanoid that threw fake boulders around, just like in the original.

The best thing, however, was the fact that you could watch all these zany goings-on while listening to a live orchestra and talented singers offer up the full Mozartean musical experience. Musical Director Stephen Karr ably conducted a fine-sounding 25-piece orchestra — just the right size for Mozart — and the singers were generally high quality. For any quibble, such as occasional limited dynamics or struggles to reach the lowest notes, there were other highlights like Claire Averill (Blondie) who delighted with the dichotomy of her bimbo persona and astonishingly strong operatic voice.

Is it possible that all the pop culture campiness made this production off-putting or irrelevant for the more (ahem) mature audiences? Not that I could see. Star Trek will be 50 years old next year, and it may pain many of the original Trekkies to realize it, but those silver-haired folks sitting in the expensive seats? That’s you. Sorry.