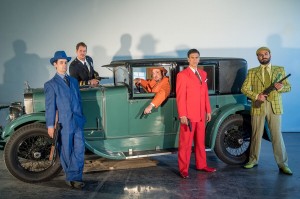 With the #MeToo movement lately having its cultural moment, whereby at least some men behaving badly get some form of comeuppance, it seems quite timely to have the Pacific Opera Project staging Don Giovanni, the quintessential tale of out-of-control toxic masculinity. To keep things fresh, Artistic Director Josh Shaw has taken over an old warehouse in East LA and staged the opera as a mashup where old Seville meets 1930s Dick Tracy gangster culture. The show continues through April 22.

The character of Don Juan — the part-playful, part-malevolent incorrigible womanizer — first emerged in Spain in the early 17th century. There was already a well-established tradition of Don Juan operas in Prague by the time Mozart debuted Don Giovanni at the (still operating) Estates Theater in 1787. The opera, with libretto by Da Ponte, was an immediate smash and paved the way for Mozart’s eventual acceptance into the top rank of composers in Vienna. Its unusual mix of serious, comic and supernatural elements has made it a favorite with audiences worldwide ever since.

If you’ve ever seen Warren Beatty’s 1990 film Dick Tracy, you’d get an idea of the boldly stylized look of Shaw’s production. In place of the detective’s bright yellow trench coat, we have the Don’s red suit with red shoes and matching fedora. Costumer Maggie Green has dressed other characters in coordinated outfits of equally bright primary or tertiary colors. They seem all the more eye-popping due to the restrained white-painted background of the set — a bi-level assemblage of doors, windows, nooks and stairways.

With translated supertitles incorporating lingo appropriate for flatfoots, wise guys and dames, the joke can wear a bit thin at times. The cultural dissonance between Italian language opera giocoso, Spanish names and settings, and 1930s cops and robbers culture is sometimes a bridge too far, but overall it’s a rollicking good time, with the entire cast delivering their roles with gusto, heart and panache.

Bass-baritone Adrian Rosas performs the title role with a mixture of confidence, arrogance and cruelty that seems just right. But Mozart has classified this as a comic opera, and to that end we have E. Scott Levin as the portly Leporello, the hapless servant of the Don, who has ample opportunities to show off his comic chops. Levin is hilarious in his obsequiousness toward his boss and his self-importance. Another standout is Daria Somers as Donna Elvira. While her continual complaining and perpetual victimhood can get a bit annoying, she rescues the role with a strong, glamorous stage presence and a rich, smooth soprano of undeniable power and control. Finally, it’s important to recognize Andrew Potter playing the Commendatore. His 6’10” frame, coupled with the subterranean bass that emanates from his vocal chords, creates an unforgettable presence that is at its best in the final scene when he appears as the ghostly statue that will lead the unrepentant Don Giovanni to his doom.

Director Shaw has found an excellent new conductor in Ryan Murray, who is currently serving as associate conductor for the Modesto Symphony Orchestra. Fittingly for a conductor of Mozart, Murray is a past winner of the Vienna Philharmonic’s prestigious Ansbacher Fellowship for Young Conductors and spent a summer in residence alongside the Vienna Philharmonic. For this opera, he leads 19 professional contract musicians who, even though consigned to a small space adjacent to the warehouse, still sounded fresh and lively. I happened to be sitting in line of sight with the orchestra, so I suspect I had better sound than those sitting toward the rear of the space, who would receive reflected sound only. But the performance was faultless.

With virtually every one of the 300+ seats filled in this temporary space, one can hope that POP Opera is now generating enough mojo to be on the verge of breaking out of the smaller space they usually use at the Highland Park Ebell Theater. Last year they sold out the Ford Theater for one night of their Star Trek-themed Abduction From the Seraglio. This year they are hoping for another sellout at the same venue with Carmen on Sept. 1. Shaw is not yet saying what the thematic twist will be, but it’s a good bet that it will be at least as entertaining as this Don Giovanni.

Tickets and information at: https://www.pacificoperaproject.com/dongiovanni