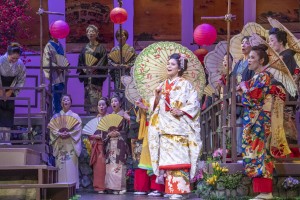 The libretto for Puccini’s “Madama Butterfly” is in Italian, but the characters are American and Japanese. What if, Pacific Opera Project asked, we rewrote this opera in English and Japanese? Sounds amazing, right? … Well, it is!

On April 6, Pacific Opera Project and its inspired artistic director Josh Shaw premiered an English and Japanese “Madama Butterfly,” a co-production with Opera in the Heights (of Houston), at the Aratani Theatre in LA’s Little Tokyo to a sold-out crowd.

POP rocks! That’s because it continually asks creative questions and comes up with ideas that attract a new, vibrant and often younger crowd to opera. Consider their take on Mozart’s “Abduction From the Seraglio” which had a “Star Trek” twist and sold out at the Ford Amphitheatre. Or 2014’s intimate and immersive “Tosca” which took audiences from church sanctuary to courtyard for various scenes. This year’s first show put video game characters in Mozart’s “The Magic Flute.”

A young and energetic company, POP is not only putting on high-quality opera, but also redefining the genre. Their stated goal is to make opera accessible, affordable and entertaining — and they’re on fire.

POP’s performances are always colorful, creative, exciting and fun. “Madama Butterfly” was no exception. POP’s production was absolutely beautiful. The scene that introduces Butterfly with an entourage of women from her community is one of the most gorgeous scenes I’ve ever seen on stage: kimonos in all shades and patterns, delicate umbrellas, and flowers all around a Japanese home with sliding doors.

The staging was pretty traditional, which fit with Shaw’s concept of emphasizing the difference between the two cultures that is at the heart of the story. He also stressed this idea with the translation to English and Japanese (libretto by Shaw and Eiki Isomura) and with the casting of Japanese singers in Japanese roles and American singers in American roles.

On opening night, Janet Todd stepped into the leading role of Cho-Cho San, taking the place of Keiko Clark. With one week’s notice, Todd, who (Shaw announced before curtain) is not fluent in Japanese, mastered her part. Without knowing that, I would have thought her performance remarkable, but considering that knowledge, it was unbelievable! Todd’s Butterfly fluttered with sweet joy and delicate innocence, making her later heartbreak all the more moving. Her voice was exquisite. I don’t know if Todd is Asian (her name obviously is not and she is from Australia), but she looked Japanese, and that fit with the casting concept.

All of the main parts were well cast, and the acting and singing were worthy of the finest opera stages. I particularly enjoyed two other characters: Eiji Miura as Goro, the greedy matchmaker, and Kenneth Stavert as Sharpless. Both had strong voices and nuanced acting skills.

POP’s 22-piece orchestra was outstanding, accentuating all the beauty of Puccini’s score and sounding larger than its size. The sounds of the harp and strings were especially dulcet. The POP chorus, with members from the South Bay Singers, deserve a shout out as well.

The Aratani Theatre at the Japanese American Cultural and Community Center was a large venue (for 800) with an intimate feel — no need for opera glasses with those good seats. POP’s changing venues probably help them grow and diversify their audience as well. For Saturday’s show, there were people from the Japanese community and beyond who had perhaps never seen an opera. [a spoiler alert may be in order] At least many had never seen “Butterfly,” if the startled gasps when Pinkerton’s American wife walked on stage in the final act are any indication.

There are only three performances of “Butterfly” in total, two coming up April 13 and 14. Sunday is sold out, but there are 80 tickets left for Saturday. Go!

Up next for POP is a crowd favorite, their vibrant “Mikado,” in August. Visit https://www.pacificoperaproject.com/.