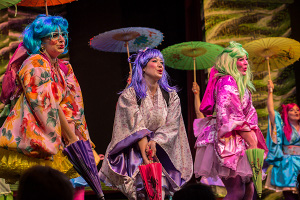 Gaudy, flashy and with eye-popping colors, the over-the-top visuals of Pacific Opera Project’s The Mikado are the Technicolor herald of a new cultural gun in town. Not that LA Opera has to worry about being dethroned as L.A.’s preeminent source of operatic entertainment; we are, after all, talking about opera on a quite different scale. But the idea that in 2013 a new opera company barely two years old can, on a shoestring budget, manage to sell out its performances is indeed encouraging news for the local arts scene.

One of the most popular operas ever produced, Gilbert and Sullivan’s The Mikado opened in London in 1885 and quickly spread to other countries where it enjoyed unprecedented long runs. Much of its enduring appeal is due to the exotic locales and costumes, the often absurd yet clever spin of its lyrics, and its ease of adaptability to new generations of audiences (even original librettist W.S. Gilbert rewrote a fair amount of it for a 1908 revival). The Mikado was one of the first musicals I ever saw as a kid and I never forgot it. Modern day teens and tweens of L.A. would, I think, have an equally memorable experience with this production, especially with the updates.

The first (and perhaps last) thing you’ll notice about this production is the costuming. Costumer Maggie Green has given us a Mikado as filtered through Tokyo’s eccentric modern-day Harajuku style. While not the first time Mikado production designers have seized upon this idea, it may be the first for L.A. and, of course, it fits the silliness of the opera quite well. The women sport day-glo wigs, silk robes over tutus, bright leggings and sneakers, accessorized with Hello Kitty backpacks, piercings and parasols. For the men, its long hakama skirts and colorful shirts, ties and dark suit jackets with headbands and sunglasses. It all adds up to a riot of color that’s enough to penetrate your eyelids, should you attempt dozing off.

The production is made up of mostly local performers, and there are a few standouts. James Schindler plays KoKo, the Lord High Executioner, with an amiable disposition and projects a clear tenor. Phil Meyer, with his expressive, rubbery face, does a fine job as Pooh-bah, the Lord High Everything Else. The contrast between his tall, imposing stature and obsequious nature is comedy gold. Best of all is Matthew Ian Welch as the Mikado. Youthful and small of stature, Welch possesses a surprisingly strong baritone, which helps project an overinflated sense of self-importance worthy of Kim Jong Un. His shiny gray military-style costume accessorized with aviators, a riding crop and oversized peaked cap magnify his ridiculousness.

I wish I could be more enthusiastic about the two romantic leads, Yum Yum (played by Katy Tang, who happens to be Miss Culver City 2013) and Nanki-Poo (played by Matthew Miles). While endearing and “cute” in their demeanor, I felt they lacked dynamics in both their acting and singing. They hit their notes, but needed a bit more projection. However, it’s worth mentioning that this production features a revolving cast and you may experience a different set of lovers (and other characters mentioned) on a given night. Luckily, the madcap Mikado himself, Welch, will be present for every performance.

There’s not much to say about the set or lighting — a series of abstract green and purple panels and the hint of a roof and window serve as a backdrop, while a few green-painted risers are the only objects onstage. It’s not very much above a typical high school production in execution, but it serves its basic purpose as backdrop. I appreciate the financial constraints facing a small performing company, and Director Josh Shaw has wisely spent his limited funds ensuring a high quality of dancing, acting and musicianship (a small chamber orchestra plays live). As long as the human performances are strong, anyone should be able to overlook an austere production design, especially when it helps keep ticket prices low.

The libretto has been cleverly updated with references ranging from Gangnam style to Groupons. Celebrities like Kim Kardashian and Rihanna are skewered; and even the disgraced former mayor of San Diego gets a potshot. It’s all in good fun and helps keep things rolling along at a good clip until everything gets sorted out in the end.

With The Mikado, and the Pacific Opera Project in a more general sense, Josh Shaw and Musical Director Stephen Karr have achieved something important: Creating accessible opera, updated in often surprising ways, that does not cost much more than the price of a movie ticket. You don’t have to go downtown to see it (this production opened in Pasadena before moving to Santa Monica) and you can be assured of a generally high level of performing skill. And that’s saying a lot.

“The Mikado” continues Sept. 20-22 at the Miles Memorial Playhouse, 1130 Lincoln Blvd., Santa Monica. Tickets are $30, $20 for students and seniors. Pre-show lecture one hour before curtain. For more information, visit www.pacificoperaproject.com.