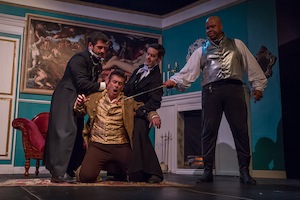 Pacific Opera Project, known for their “POP-up” operas that take place in diverse spaces around town, has just popped up again with Tosca, their first effort of the fall season. In a stroke of supreme savvy, Director Josh Shaw found a venue that is perfectly tailored to the subject and settings of Puccini’s 1900 opera: St. James Methodist Church in Pasadena. Each of the three acts takes place in different spaces within the church grounds, a decision that not only keeps the audience literally on their toes, but also solves the problem of changing sets in spaces without wings or a backstage.

Since Act I of Tosca is set inside a church, what could be more fitting than for the audience to be seated in the pews watching the opera unfold in the front of St. James? The austere Methodist sanctuary has been transformed into a Baroque chapel with the installation of a floor-to-ceiling trompe l’oeil screen festooned with the appropriate carvings and paintings and bisected by a scaffold. The effect is all the more convincing considering the reverberant acoustic sounds like a church (the live orchestra is hidden behind the screen) and one could say it even smells like a church.

Here, we are introduced to the opera’s three main characters: the lovers Cavaradossi and Tosca, and their nemesis Scarpia. Of the three, the standout is Brian Cheney as Cavaradossi. Amplified by the resonant hall acoustic, his pure, bold tenor fills the space with humanity and pathos. Also effective is baritone Patrick Blackwell, appropriately menacing with his shaved head, black leather outfit and NFL-like size. The way he abuses Tosca while proclaiming his love for her, I couldn’t help but think of the recent Ray Rice elevator assault scandal. On the other hand, Daria Somers as Tosca showed fine dramatic chops in how realistically she communicated the depths of her disdain and revulsion toward her tormentor. Also notable was the chorus, arriving via a colorful procession down the main aisle, led by children and followed by red-frocked church prelates, a bishop and altar boys swinging smoking censers.

Act II, ostensibly set in Scarpia’s apartment in the Palazzo Farnese, takes place in an adjoining lecture hall/performance space where the audience moves during first intermission. The set design with green walls and white trim lends a suitably impressive backdrop to the extended exchange between Tosca and Scarpia. The extended back and forth of negotiation puts a bit of a drag on the momentum, but the scene soon enough resolves in Tosca’s famous searing rebuke as she takes her deadly revenge: “Questo è il bacio di Tosca!” (This is Tosca’s kiss!) as she stabs Scarpia in the heart.

On a temperate Southern California evening, there is little better than listening to great music under the stars and, fortunately, this is what is in store for Act III. The audience assembles in the enclosed cloister or courtyard of the complex and faces a dark corner where the orchestra, now visible for the first time, has assembled. The libretto translation is projected onto the stucco wall above the orchestra. Remarkably, as the lights come up, you realize that all the action is to take place above, on the roof. Soldiers roam about on crenellated battlements erected on the roof edge while preparing for the execution of Cavaradossi. Watching the hapless hero kneeling, his hands bound, while his executioner stood above him evoked another similar recent event — those gruesome ISIS beheadings. Using the roof was successful in another way — it was the perfect location from which a distraught heroine might pitch herself off when all hope is lost.

Music Director Stephen Karr ably conducts a crack orchestra of about 15 players, and the fact that everyone is quite close to the “stage” amplifies the dramatic effect of the music, especially when the bass and trombones let loose. Considering that even the most expensive premium-seat tickets are only $50, this Tosca represents one of the best values you’d ever expect to find in opera today, especially at this high level of production quality. Highly recommended.