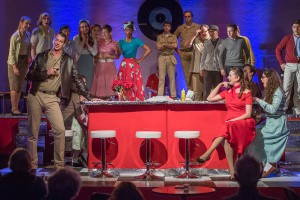 Call me a reactionary, but I love Donizetti operas. While he composed nearly 70 operas in a variety of genres, he is best known for his comic operas. In this genre, both in music and story, it seems his only aim is to entertain. He mixes lighthearted banter with broad comic bravado and just a touch of treacly emotional melodrama in a recipe bound to stir delight. Which is why The Elixir of Love is a great choice for the latest Pacific Opera Project (POP) opera, notwithstanding its obvious relevance to Valentine’s Day.

With typical irreverence, Artistic Director Josh Shaw has moved the action from 19th-century Italy to a 1950s American diner and uses lyrics from ’50s pop hits as the basis for a revised and amusing libretto. Imagine characters lobbing lines at each other such as “You ain’t nothin’ but a hound dog!” or “Earth angel, earth angel, will you be mine?” or “Yes, I’m the great pretender.” It’s a clever idea and it largely works, especially with the older baby boom audience that remembers many if not most of these lyrics.

The lovelorn hero Nemorino (Kyle Patterson) is a soda jerk at the diner, Adina (Amanda Kingston) is the object of his affection, but is also romanced by Sergeant Belcore (Andrew Potter), a towering, swaggering Romeo who almost succeeds in stealing Adina’s heart. The sets, along with the ’50s costumes, are visually appealing with vibrant reds and clean whites dominating. However, due to space limitations in the Ebell Club in Highland Park, the orchestra, led by Nicholas Gilmore, is behind the actors and behind the sets, and only barely visible. This does present somewhat of an imbalance between the singers and orchestra, especially when the singers are belting out their vocals no more than 20 or 25 feet from your seat.

This would be a drawback if the singers were less than very good, but that’s not an issue here. It’s clear that Shaw has cast his net far to bring in talent from New York, Texas and Virginia for the production. Kingston has an impressively clear and powerful soprano that easily soars above the chorus, although with her relentless strong vibrato she can sound a bit warbly. Patterson brings an emotional and mellifluous tenor to a role that has been memorably sung by everyone from Enrico Caruso to Luciano Pavarotti. The famous Act II aria he sings, “Una Furtiva Lagrima” (A Hidden Tear), will have you reaching for your hanky as well.

The supporting singers are particularly fun to watch and listen to. The confident baritone of Potter is perhaps only outdone by the marmoreal basso voice of Rocky Sellers who plays Dulcamara, the traveling huckster straight out of commedia dell’arte central casting who is promoting his love potion. As explained by Shaw in his preface, the “elixir” is primarily made of alcohol, which explains the woozy, exaggerated behavior of its imbibers. He encourages the audience, of course, to get their own elixir in the form of wine, which is sold at very affordable prices by the bottle.

The 20-member chorus adds even more fun with sporadic dance numbers, making the whole production feel a little like Grease, or more apt, Happy Days. You half expect Richie and Potsie to emerge at any moment. In fact, Potter does channel some obvious Fonz moments during his performance. I would guess that the production also owes a debt to Coppola’s landmark film, American Graffiti.

As the Pacific Opera Project gains experience, its productions have gained polish. In sets, costuming and overall concept, The Elixir of Love shows a higher level of sophistication than most earlier productions. But it still offers the irreverence, silliness and unabashed good vibes that have become the hallmark of this company. This, along with its low cost of entry, will continue to make opera less intimidating, more approachable and relevant for new audiences yet to be bitten by the opera bug.

The Elixir of Love continues through Feb. 25 at the Ebell Club of Highland Park. For information and tickets, visit www.pacificoperaproject.com/elixir-of-love.