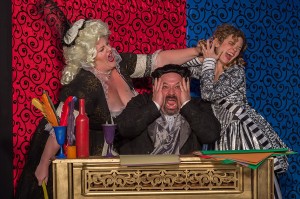 Those familiar with the Oscar-winning film Amadeus will remember the beginning where aging composer Antonio Salieri reflects back on when he first encountered Mozart. In the flashback, we see a shrieking Mozart running through a stately palace, chasing a giggling chambermaid. It is in this spirit that Pacific Opera Project presented Salieri vs. Mozart, a recreation of a key moment from that film — and from history — where the two composers squared off against each other in Vienna’s Schonbrunn palace in 1786 in a sort of operatic grudge match.

Emperor Joseph II had invited 80 guests to a luncheon to witness a competition of one-act musical comedies, pitting Mozart at one end of the room against Salieri at the other. Guests simply turned their chairs around at the conclusion of the first piece to watch the second. And so it was once again at the South Pasadena Public Library, an attractive exemplar of one of Andrew Carnegie’s gifts to America in the early 20th century.

For the occasion, Mozart wrote Der Schauspieldirektor (The Impresario), which he described as a comedy with music. It is in the form of Singspiel, a subgenre of German opera that relies on dialogue, exaggerated comic characters and often-magical elements. Salieri countered with Prima La Musica, Poi Le Parole (First the Music, Then the Words), also comic, in the Italian opera buffa style. Today, the Salieri piece is performed rarely, while Mozart’s work appears with some regularity, with the libretto typically rewritten for modern sensibilities.

Indeed, POP Artistic Director Josh Shaw has rewritten the libretto of The Impresario, creating a comic play about the experiences of an opera company trying to negotiate the pitfalls of a demanding patron and battling divas. It soon becomes clear that this is a self-parody with the impresario being himself and the opera company his own Pacific Opera Project.

Don’t expect much music here; there is a lovely overture, and a pair of arias where the two competing divas (Brooke de Rosa and Karen Hogle-Brown) try to outdo each other with their highest notes, but this is more a play than an opera. The tone is slapstick, somewhat crude and exaggerated. With so little music, one must be entertained by the comedy, which I found to be only moderately successful.

More satisfying was the Salieri piece. One reason was that there was a good deal more music. To the existing string quartet, a harpsichord was added, played by Musical Director Stephen Karr to pleasing effect during the recitatives. Another reason was Tracy Cox, a soprano who keeps getting better and better every time I see her. Her powerful and controlled voice commands attention and her acting skills are sophisticated as well. Cox plays a prima donna who exemplifies opera seria (serious opera), while Justine Aronson is her rival specializing in opera buffa (comic opera). They eventually wind up in a duet of simultaneous arias, each expressing their own style, a novel idea at a time when the two forms were normally kept strictly separate.

Baritones Andy Papas and Alex Boyd do double duty as the leads in The Impresario, as well as playing the Maestro and the Poet respectively in the second half of the program, giving each the chance to show off their skills as comic actors and as singers. Boyd, in particular, gave a good account of his vocal talents in the Salieri piece.

While Salieri vs. Mozart ended up feeling a bit uneven, and suffered from slapdash-looking sets (excused because they had to remove the sets entirely after each performance), it was a great idea and reflects the admirable determination of Shaw to find new ways to make opera fun, relevant and affordable for new audiences.

For more information about Pacific Opera Project, including a one-night revival of their “Abduction From the Seraglio” at the Ford Amphitheatre coming up on Sept. 3, visit http://www.pacificoperaproject.com.