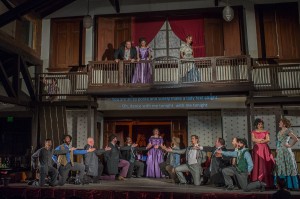 Pacific Opera Project presents its own take on "The Merry Widow." / Photo by Martha Benedict

Can a two-horse mining town in the Old West peopled with provincial rubes stand in for the rarified world of Parisian aristocrats in the Gay Nineties? If you’re Pacific Opera Project it can. The Merry Widow composer Franz Lehár might roll over in his grave to see his 1905 operetta so twisted, but he might also laugh, as you are likely to during this mostly entertaining production.

Obviously, a world populated with barons, ambassadors and diplomats wasn’t going to work in rural California, so Artistic Director Josh Shaw and his wife Kelsey together rewrote the libretto in English in an ironic, jokey style that has become a hallmark of POP productions. Kelsey adds that they were partly inspired by the 2014 comedy film A Million Ways to Die in the West. Some of the characters have been renamed (Count Danilo is now Danny the sheriff) and the operetta itself is retitled The Merry Widder. The basic plot revolves around the townfolks’ efforts to prevent a rich widow from marrying someone from outside the town, which would lead to economic disaster.

The Ebell Club of Highland Park is the perfect size for this fledgling opera company (although they are selling out most performances), and the main floor is filled with tables bearing snacks and wine. This time, however, in order to provide more space for the set, the normal arrangement of stage and audience has been reversed, with the stage and live orchestra at the back of the theater, and the audience populating the stage and floor, facing the rear of the theater. This works well, allowing the set to be larger and more elaborate than usual. Depending on the act, it is a saloon, a dance hall and a large parlor.

With two intermissions (this is not a short operetta), and with all the plot setup — as well as some of the gags and jokes falling flat —by the end of the first act, the production teeters on the verge of tedium. It doesn’t seem to be quite working. But the production gets back on track and builds up a momentum that it maintains until the final curtain. The dance sequences add a great deal to the show. We have lyrical waltzes, bawdy can-can dancers, fancy two-steppers and more. It’s all fun to watch, and the fancy costumes help make it the kind of spectacle we want to see at an opera.

Stephen Carr conducts the orchestra, partially visible through a door behind the main set. Lehár’s sparkling music is a large part of the enduring success of this operetta, and it is wonderful to hear the musicians play it in an intimate setting. That’s not the only benefit from this small hall: when all assembled, there are nearly 30 singers on stage, and, during the choruses, the effect is powerful and moving.

The singing on this night was somewhat uneven. The ‘Widder’ role is sung by Bevin Hill who excelled in both acting and singing. Her strong, clear voice easily filled the space. She was clearly the standout, although Alba Cancél, playing the mayor’s flirty unfaithful wife, was also very good. The male roles, with a few exceptions, were not as strong. Nick LaGesse, playing the important role of Danny the sheriff, had some problems finding his pitch, and Scott Levin as the Mayor was just not compelling.

Like any comedy, some parts are funnier than others. Josh and Kelsey Shaw are to be commended for giving it a good try. They largely succeed. I particularly like a sequence where the obsequious Chinese servant Yan-Can-Sing (played by Glenn Fernandez) sheds his coolie outfit for a tuxedo, top hat and cane and belts out a number showing why the ladies love him so. The contrast between the words to the song and Fernandez’s effeminate, mincing portrayal is hilarious.

Pacific Opera Project continues to take risks and push the boundaries of traditional operatic fare, while providing excellent value for one’s entertainment dollar. While The Merry Widder does not rank with their sublime 2014 production of Tosca, it is still a fun and worthwhile piece of entertainment.