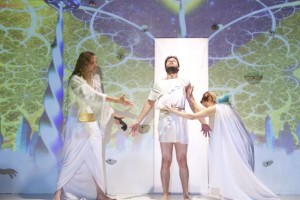 How do you boil down the 10,000 lines of verse in Paradise Lost to absolutely nothing and still have it be meaningful? Simple: give it to Jones (Welsh) Talmadge of the Not Man Apart Physical Theater Ensemble and have him do a movement-only adaptation. John Milton’s epic 17th-century poem expanded upon the biblical story of Genesis in a way that readers had never seen before. Likewise, Talmadge has stamped his own distinctive imprint upon the piece — not only as director (with NMA Co-artistic Director Laura Covelli), but as adapter, choreographer, set designer and performer. The result is an innovative piece of modern theater that is one of the most visually dynamic in recent memory. Paradise Lost: Reclaiming Destiny runs through April 2 at the Greenway Court Theatre.

“In the beginning, God created the heaven and the Earth…” And so it likewise begins in Paradise Lost. A man and a woman (Father God and Mother God) in flowing white robes appear to ridiculously angelic music, and using some kind of digital wand, they spread stars and planets across the cosmos (the large background screen). I’m not sure what kind of technology is at work here, but it is fascinating to see them hurl trees, animals, oceans and flowers upon the screen with a mere wave of the hand — very effective.

Ultimately, the visual pyrotechnics of The Beginning settle down, and we begin to know the characters: Adam and Eve, the Archangels, Sin, Satan, Beelzebub and a host of other divinities. Their main communication is via movement — modern dance mixed with some acrobatics. Talmadge has, of course, thrown in several wry twists to stay provocative: Adam is a black man (Leslie Charles Roy, Jr.) and Eve white (Alina Bolshakova); Adam gives Eve the apple of earthly knowledge, not vice versa as in the original; and there is a hilarious dining scene mid-way through with Sin and Death gamboling to the 1955 song Only You.

It’s a testament to the strong costuming and characterizations that we have a pretty good sense of who everyone is. James Bane as the black-clad Death is iconic in appearance. Both Adam and Eve exude tenderness and innocence, clearly communicated in their many pas de deux dances. Covelli is ripe, sly and lusty as Sin, while J-Walt Adamczyk as the radiant Father God gets kudos for his classic beatific blond Jesus look, as well as for his role in creating the interactive animations that are projected on the rear screen.

But it is Talmadge himself who is the most riveting and charismatic as Satan. Tall, muscular, bald and with blackened eyes, he stalks the stage — wild-eyed at times, glaring with malevolence at others — and uses props to augment his persona. Like a demonic gymnast, he performs feats of strength and agility on a pair of ropes that descend from the ceiling, and later wields a heavy 10-foot-long chain that alternately writhes, encircles and binds him, not-so-subtly suggesting the snake that resides in the famous tree in the Garden of Eden.

In Milton’s original, Eve was given a small and subservient role. Talmadge (who recently married and took his wife’s last name) wasn’t having that, so he expanded her role to be equivalent to Adam and, of course, removes from her the blame of tempting Adam. By presenting Adam and Eve as balanced and equal he wanted to demonstrate that this is the version of humanity that God actually intended, rather than the 17th-century andro-centric version that reflected the particular English culture at the time of writing.

For a production that relies so heavily on dance, acrobatics, and aerial and martial arts, it is essential to have a director with a strong background in these disciplines, and Talmadge brings strong credentials to the company. For five seasons, he was a performer and associate creative director at Diavolo, the renowned local dance/acrobatic group. That he is able to use these skills and apply them so well to the telling of a story without words is a remarkable accomplishment. He says that Paradise Lost was 10 years in the making from conception to performance — let’s hope that we don’t have to wait that long for his next opus.

TICKETS AND INFORMATION: (323) 673-0544 or http://www.greenwaycourttheatre.org/paradiselost/