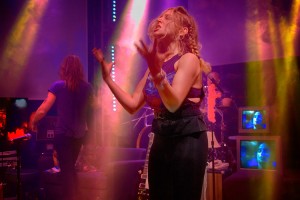 Sometimes, you just have to hand it to artists who refuse to be daunted by the sheer audacity of their vision, whatever that vision may be. And thus, I applaud the creators of Parallel Worlds, billed as “A New Rock Music Experience” that combines live music, dramatic acting and film. While I’m not sure that “new” is the right adjective to describe a show built around classic rock, it is an experience that is generally exciting and immersive, and will keep most of your senses engaged throughout.

Parallel Worlds is the brainchild of Writer/Composer/Executive Producer Brandon Beckner. A longtime musician, Beckner has also had success in the filmmaking arena with his well-received 2009 indie film, “Remarkable Power!” Drawing on his dual talents, he conceived of a show that had an interwoven storyline between what was happening on stage between musicians, and what was happening in a film running simultaneously. With each element mirroring or propelling the storyline of the other, it ignites a lively conceptual interplay that deepens the emotional resonance of the piece as a whole.

As mentioned, the three legs of Parallel Worlds are music, film and drama. They don’t all rest on equally sturdy foundations, however. The strongest element is the music. In a town as full of musical talent as LA, you would expect them to assemble a tight, rocking band and that is exactly what you get onstage. Auditions yielded six musicians who play like they have been together for years. With excellent, clear acoustics, the bass and drums have exciting, visceral impact; the talented lead guitarist and keyboardist have ample opportunity to show their chops as well.

The heart of the band is the two lead singers, played with charisma and charm by Cassidy Catanzano and Ryan Hudson. While the band is ostensibly in the studio to record a soundtrack to a film about a failing relationship, it eventually becomes apparent that there is an equally contentious relationship between the two singers. Of the pair, Catanzano really impresses with her soaring vocals and stage presence. Hudson has the look and sardonic attitude of a jaded rocker down pat and his vocals are strong as well, despite a thinner voice.

The music is straight up classic rock with no effort to be “modern.” You can hear influences of Pink Floyd, Creed, Melissa Etheridge, Third Eye Blind and The Beatles at various points throughout. What I particularly appreciated was the lack of a “Broadway” veneer to the songs. They were not sweetened or softened, and the singers avoided the typical theatrical histrionics.

Concurrent with the music, the film runs on seven screens of varying sizes that appear around and behind the performers. It tells the story of a young artist living in LA who must go to New York for a job opportunity, against the wishes of his girlfriend. Through flashbacks, we see the genesis of their relationship and the difficult choices he must face in maintaining his artistic and personal integrity. Positives were the guerilla-style shooting (presumably with an SLR), dynamic editing and interesting actors. Negatives were the too-long dream montage, extraneous personae and the cornball ending.

The onstage drama was the weakest link. Whether this was due to lyricists Steve Sobel and Paola Jimenez or Stage Director Matthew McCray, I could not say, but the “drama” between the singers felt insipid and did not go anywhere interesting, leading to a big shrug at the end. The opportunity to involve the other four players was lost, as they were not integral to the story and had no dramatic importance save for the occasional quip.

With 25 songs, Parallel Worlds could use some editing to make it tighter and maintain momentum. Paring back on the overly extended dream sequence comes to mind as an obvious place to cut. With some tweaking, this show could easily find an appreciative audience in larger venues, which it deserves. Whatever one thinks of the film or dramatic goings-on, all fans of classic rock can be assured of a rollicking good concert with engaging songs. If you’re like me, you’ll definitely feel the urge to raise your digital torch (cell phone) at encore time.

“Parallel Worlds” runs through Sunday, June 26. Catch performances Thursdays through Saturdays at 8 p.m. and Sundays at 7 p.m. Doors open at “Club Parallel” one hour before show time, as does the bar. Drinks are “on the house” with the $40 ticket purchase (served responsibly). Tickets are available online here. All ages are welcome, but parents might consider this a PG-13 show: no sexual content but some mature language. Club Parallel invades CAP Studio in the heart of Sherman Oaks for this multi-dimensional experience (13752 Ventura Blvd., Sherman Oaks, CA 91423; 818-990-2001). For more information, visit http://www.parallelworldsexperience.com.