Review: ‘Parfumerie’ at the Wallis Annenberg Center for the Performing Arts 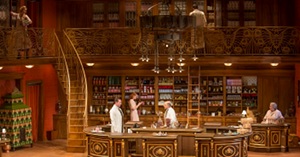 The Wallis Annenberg Center for the Performing Arts opened its doors in October with the distinction of being the first performing arts center built in Beverly Hills. “Parfumerie,” the Wallis’ inaugural production at the 500-seat Bram Goldsmith Theater, certainly sets the technical standards high for future shows there.

Allen Moyer’s simply gorgeous set of a 1937 upscale boutique could be a permanent fixture, blending in perfectly with the brand new theater’s interiors. The stage was furnished with a pair of round poof settees downstage, a “working” fireplace and a spiral staircase upstage leading up to an array of windowed cabinets. All get lit most effectively, both during and after business hours, by David Lander. Falling snowflakes outside the store’s display windows emphasize the holiday ambiance. With a state-of-the-art sound system utilizing structural implementations for optimum sound, all dialogue (and the occasional annoying cell phone rings) could be crisply heard.

E.P. Dowdall adapted Miklos Laszlo’s original comedy revolving around the people who work at Hammerschmidt’s Parfumerie over the course of the Christmas holidays in 1937 Budapest, Hungary. Those with expectations of seeing Nora Ephron’s romantic and bon mot-filled take in her successful film “You’ve Got Mail” (based on Laszlo’s “Parfumerie”) might be disenchanted by Dowdall’s adaptation. The winsome Tom Hanks/Meg Ryan plotline becomes secondary to Mr. Hammerschmidt’s serious-as-a-heart-attack situation.

Mr. Hammerschmidt seems to be very troubled, taking out his frustrations on his unofficial second-in-command George Horvath. George has a hate/hate relationship with the young, pretty salesclerk Amalia Balash. Unbeknownst to them both, they also have a love/love relationship via letters. Salesclerk Mr. Sipos loves giving his advice to all, while keeping his nose in all. Lothario Steven Kodar works his wily charms to sell to the lady customers.

The cast features some TV and movie talent, including Emmy winner Richard Schiff (“The West Wing”), who nails the frustrated, cuckolded storekeeper with his always dependable intensity and believability. Unfortunately, Mr. Hammerschmidt’s dramatics sometimes seem to belong to a different play as all others enact a broad comedic style. Arye Gross (“Six Feet Under”) as Mr. Sipos adds another commendable credit to his already impressive resume. His Mr. Sipos exudes the right combination of smarts, life experience, responsibility and desperation.

Eddie Kaye Thomas (the “Harold and Kumar” movies) gives the proper Hanks take on his lovesick George, with Deborah Ann Woll’s (“True Blood”) Amalia not reminiscent of Ryan at all. Matt Walton doesn’t get much of a chance to show subtleties beneath Steven’s Dastardly Dan villainy.

Jacob Kemp, as the shop’s errand boy Arpad Novack, boisterously trumps all the sometimes-plodding seriousness onstage with his high-energy, youthful earnestness and puppy dog devotion to his boss. (Kemp deserves a higher placement in the curtain call; if not with the four leads, then a well-earned separate bow from his group.) Adam Farabee makes his charming stage presence known in his short time as Arpad’s successor.

Veteran Broadway director Mark Brokaw gets uneven results with this production. The stage business of opening and closing the various sales countertops had no comic payoff, while the stacking and re-stacking of products at times seemed more stage businessy than actual salesclerk duties. But thanks to the sheer talents of Schiff, Gross and Kemp, the two-and-a-half-hour evening ends well.

“Timeless Scents: 1370-2013,” the first public exhibition held at the Wallis Annenberg Center for the Performing Arts, presents a history of iconic fragrances through the ages and will be on view in the Lovelace Studio Theater throughout the engagement of “Parfumerie.” Admission is free.