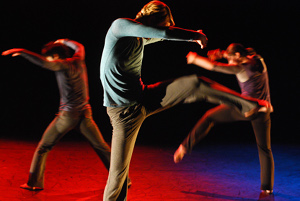 A scene from “Overlay,” Pennington Dance Group and York Dance Project’s collaboration in “Across Connections” / photo courtesy of Pennington

John Pennington began Saturday night’s show, “Across Connections” at ARC Pasadena, by introducing the dances in the program as nonlinear and without narrative. He was only partly correct. The statement appeared to be true for his company’s piece, “Yield of Vision,” and “Overlay,” its collaboration with the United Kingdom’s Yorke Dance Project. But from “City Limitless,” Yorke’s presentation, peeking out between the steps was a story, not of the traditional kind, but of joyful rebellion, stylish pursuit and self-discovery in the beats and words of American cultural icons. While Los Angeles-based Pennington Dance Group played with sounds and lights, creating delightful chaos, Yorke pushed their scenes along to a score of Dizzy Gillespie, Thelonious Monk and Charlie Parker and the poetic ramblings of Allen Ginsberg and Jack Kerouac.

From its opening scene featuring a duet with two men, to the swinging couples whirling around the stage, “City Limitless” spoke of the Beat Generation, On the Road and a time of youthful political leaning and social expression. Dressed in plaid and khakis, the attractive British cast interpreted a spirit in mid-20th-century American history that was bursting with cultural rebellion and possibility. Exciting and energetic, the dancers embodied this zeitgeist as sweetly as their flirty glances and playful embraces.

Pennington Dance Group’s “Yield of Vision” was a tad more brave new world-ish. In tight, silvery and sparkly costumes and makeup, the dancers stared at lights, turned them on and off and flitted around to the rapid ticking of a stopwatch. True to the night’s introduction, nothing made too much sense, without too much of a stretch, except maybe when Yvette Wulff floated on stage in what could be imagined as a spaceship outfit, and landed. It was soloist Li Chang Rothermich though, dancing alone and with Michael Szanyi, who told the most riveting tales with her compact frame, freezes and flexibility. Her face showed little emotion as she sped around with cold precision, yet Rothermich received a very warm reception.

Both artistic directors Pennington and Yolande Yorke-Edgell, who met as dancers in the Lewitzky Dance Company and have since maintained a long-distance working relationship, hope the program’s last piece, “Overlay,” is a first of what will be many collaborations. Existing in different places, the companies’ combined work lacked connection, between themselves and the audience. Each group performed in separate spaces, coming together at times, without clicking. It’s tricky figuring out how to make long-distance relationships work.